Enjoy this 3-tier Vegan Pumpkin Cake any time of day! It’s made with easy-to-find ingredients and topped with cinnamon buttercream and healthy salted caramel sauce. 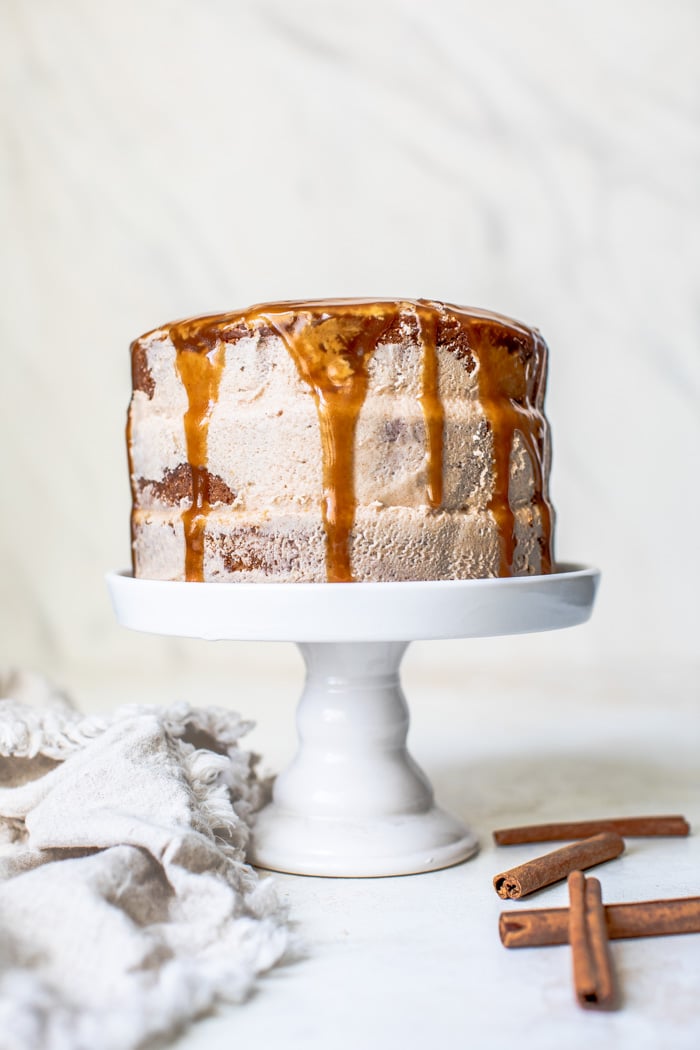 This vegan pumpkin cake is insane and I’m pretty positive you won’t know it’s vegan! It’s also made with easy ingredients, like all purpose flour, milk and canned pumpkin, which I think is important if you’re at all intimidated by vegan baking.

I originally created this recipe in 2016, but I just went back and re-tested it to make sure it still lived up to its reputation. The cake itself is the exact same recipe–I forgot how good it tasted–but I decided to switch up the icing. Originally, I used a cashew cream icing, but the problem was that it was too thin, so then I had to use a lot of powdered sugar to thicken it.

The easiest solution was to use a simple cinnamon buttercream instead, and honestly, I’m not mad about it. It’s easier to prep and you really can’t go wrong with buttercream. The cinnamon isn’t too overpowering either, which is a good thing.

WHY THIS VEGAN PUMPKIN CAKE IS SO GOOD

HOW TO MAKE THE PERFECT VEGAN PUMPKIN CAKE

Mix the ingredients, but don’t over-mix: When baking, I like to mix the dry and wet ingredients separately, then mix them together until the batter is smooth. However, it’s important that you don’t over-mix or else the cake can end up being too dense in texture, which we don’t really want for cake! 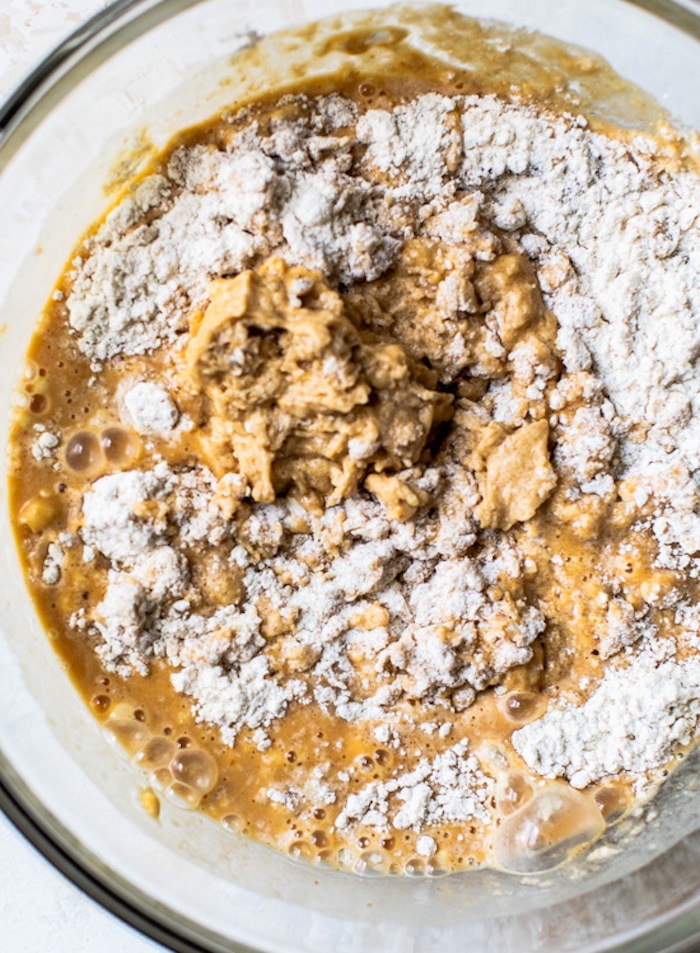 Line your cake pans: This step may seem a little tedious, but there’s nothing worse than baking a cake and then having it stick to your cake pan. So, I like to place one of the cake pans on parchment paper, then trace a circle around it three times and cut out three parchment circles and place them on the bottom of my cake pans. This ensures that the cakes will come out when they’re inverted onto a cooling rack. 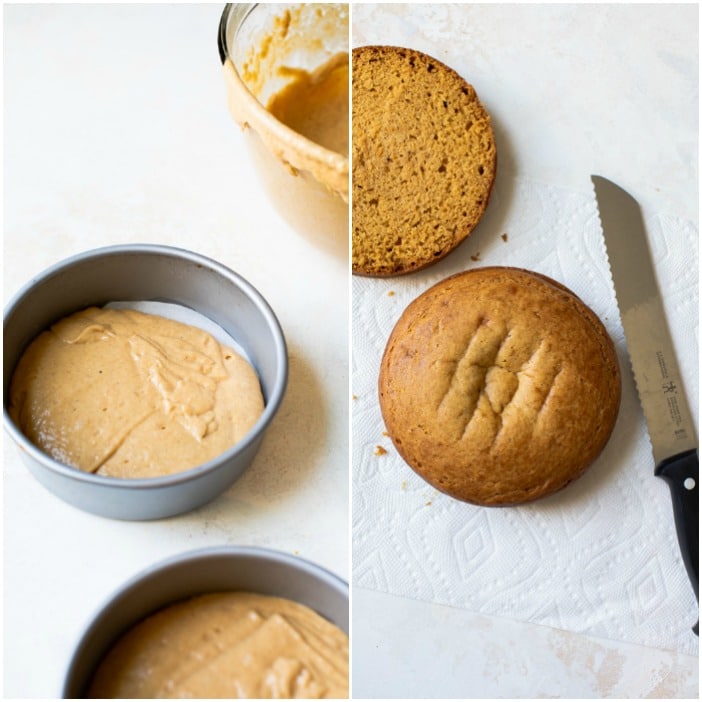 Ice the cake, but don’t freak out if it’s not perfect: I know the irony in that sentence since I’m supposed to be telling you how to make the cake “perfect”, but the truth is that the icing doesn’t have to completely cover the cake. It’s “in” these days to create semi-naked cakes, and that’s exactly what this is. I like using my offset icing spatula for icing cakes because I think it’s way easier than using a regular knife, but other than that, I just make sure the icing is covering the majority of the cake. 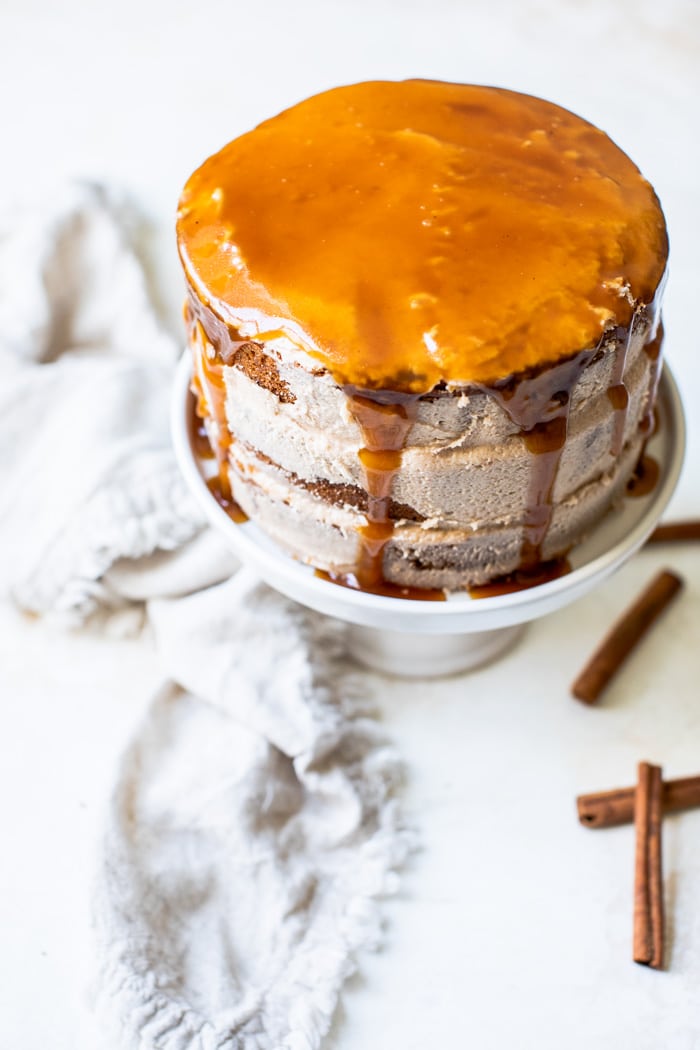 SHOULD I ADD THE CARAMEL SAUCE?

Maybe! If you like your cake on the sweeter side, then yes you should definitely add it. If not, feel free to skip this step and completely omit it.

CAN I MAKE THIS IN A DIFFERENT SIZE CAKE PAN?

This cake is a 3-layer cake made in three 6″ cake pans. But, you can use two 9″ cake pans instead if you prefer. 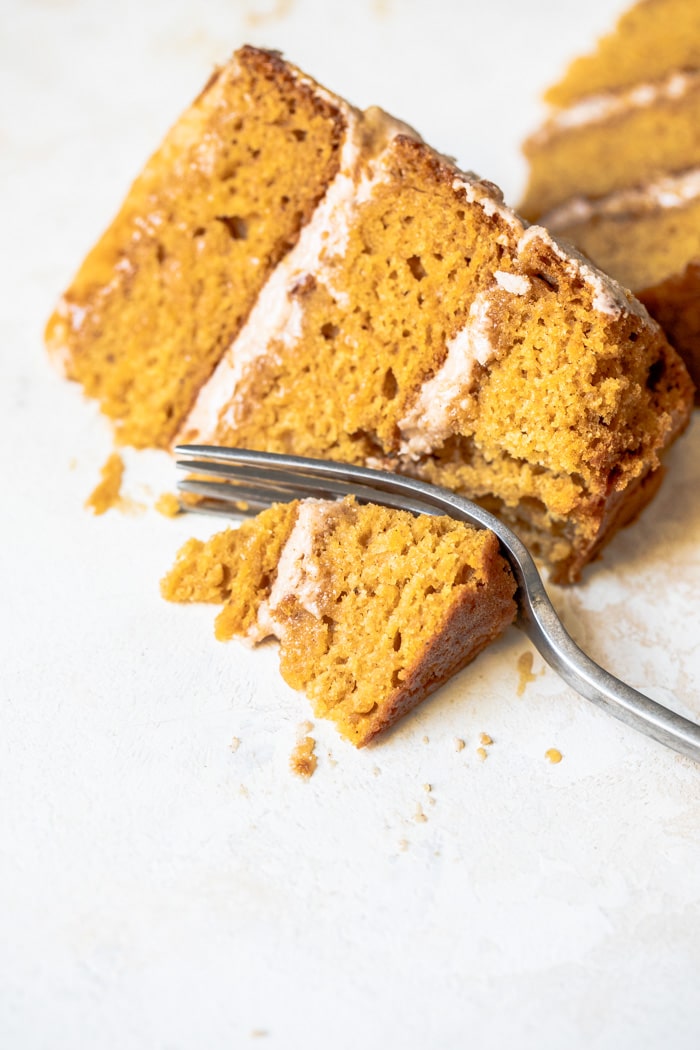 CHECK OUT THESE OTHER VEGAN DESSERT RECIPES

*Caramel sauce is optional. If you want the cake to be on the sweeter side, definitely add it! If you don't like super sweet cakes, omit the caramel sauce.