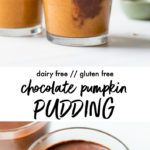 This Chocolate Pumpkin Pudding is made with better-for-you ingredients like banana, maple syrup, and yogurt, and the texture is spot-on. It can easily be made dairy free, and only requires 15 minutes of prep time! 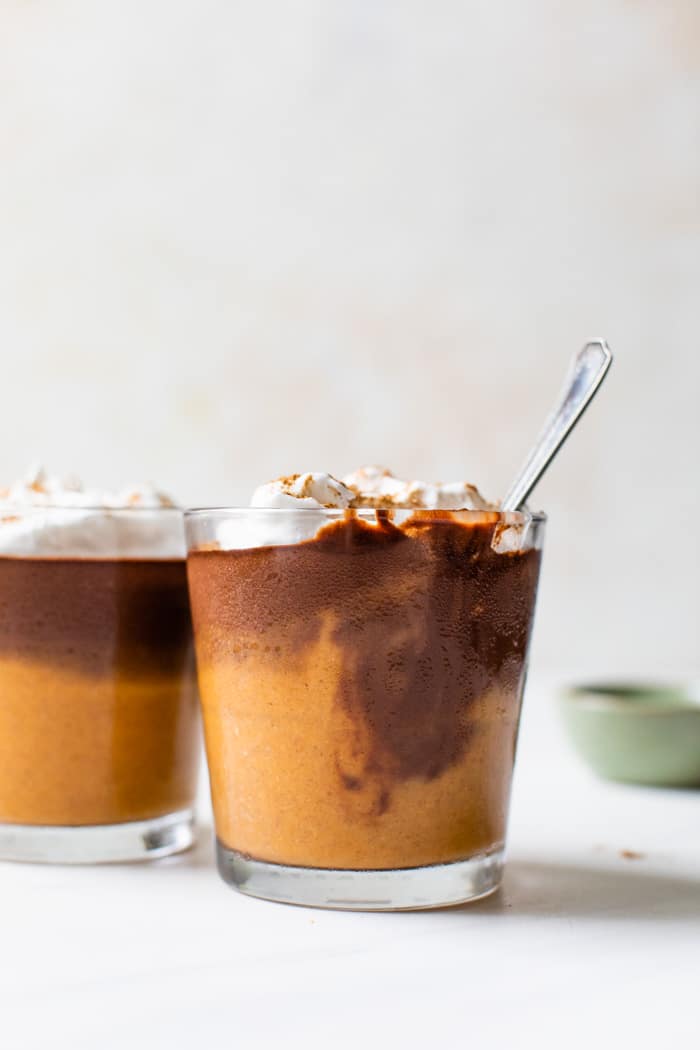 You're going to LOVE this pumpkin pudding, even if you're not a "pudding person". Miguel claims he's not, but he 100% devoured this pudding so I'm thinking maybe he is?

I like pudding for a few reasons, one of them being that it's easy whip up, and since you store it in the refrigerator, you can eat some every night after dinner. ...unless you end up eating it all in one sitting, which is more than ok.

This pudding recipe uses nontraditional pudding ingredients, but the texture is exactly the way pudding should be. Read below for tips on how to make it perfectly each and every time!

WHY YOU NEED THIS PUMPKIN PUDDING 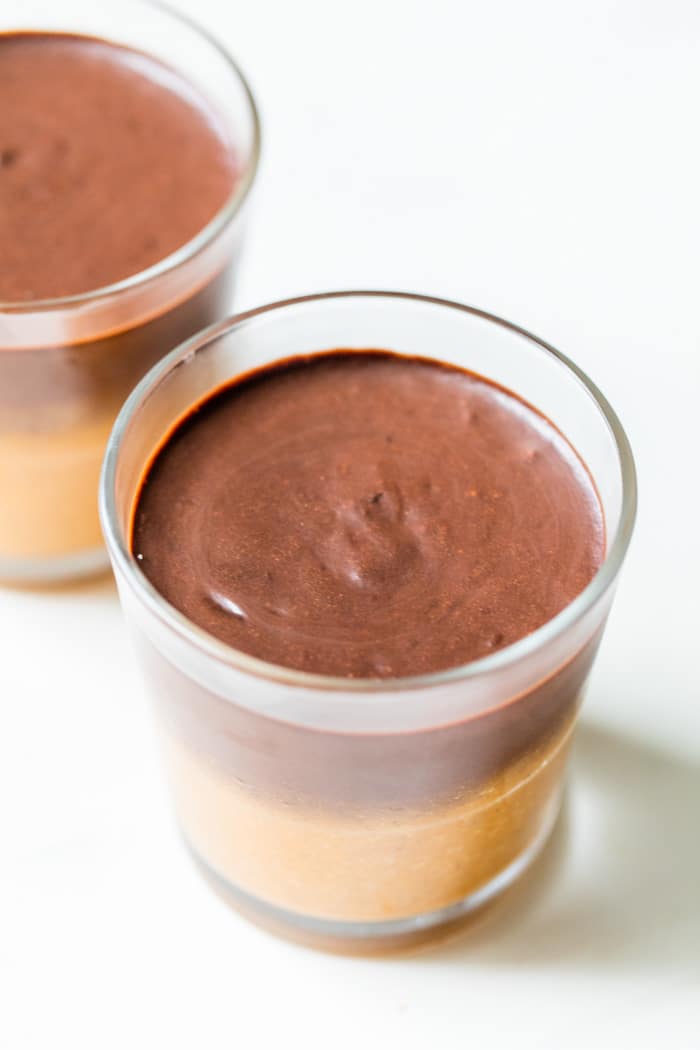 HOW TO MAKE CHOCOLATE PUMPKIN PUDDING

This pudding recipe is a little bit different than traditional pudding (i.e. it's healthier), so let me walk you through how to make it.

First, you'll make the pumpkin layer by whisking ALL of the pumpkin ingredients--pumpkin, milk, yogurt, syrup, and spices--together before transferring them to glasses or jars.

The chocolate layer begins with a mashed banana, then it's combined with cocoa, milk, syrup, yogurt, and cinnamon. While this may seem good enough, you can (and should!) take it a step further by melting chocolate and coconut oil together, then adding the melted chocolate to the bowl with the banana and mixing everything together really well. 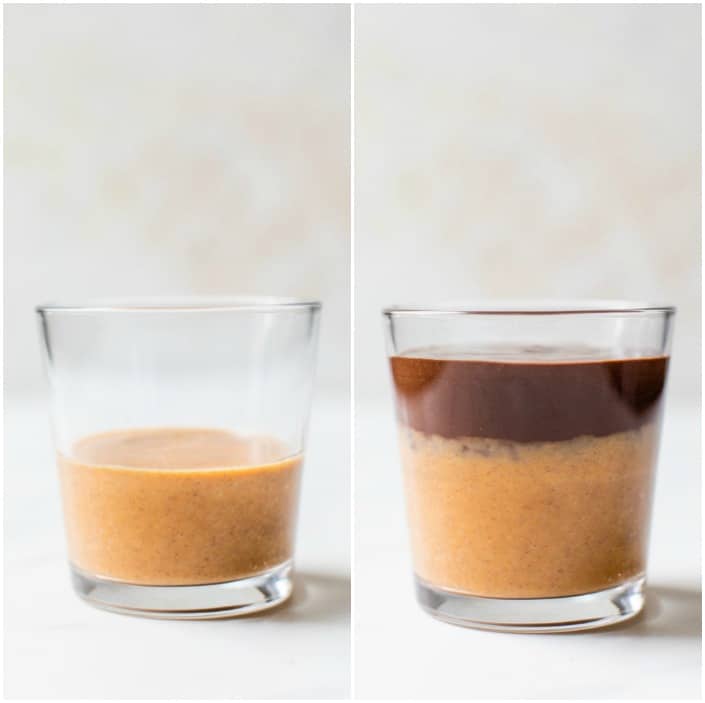 Almond milk: Technically, any milk works in this recipe. If you want to keep the pudding dairy free, be sure to use dairy free milk. But, regular dairy milk does work if that's your preference.

Dairy free yogurt: Forager is my favorite brand of plant-based yogurt, but for this recipe, we want to use yogurt with a thicker consistency. So, I like Kite Hill or So Delicious (make sure to get plain-flavored yogurt). If you're ok eating dairy, regular Greek yogurt works well too. 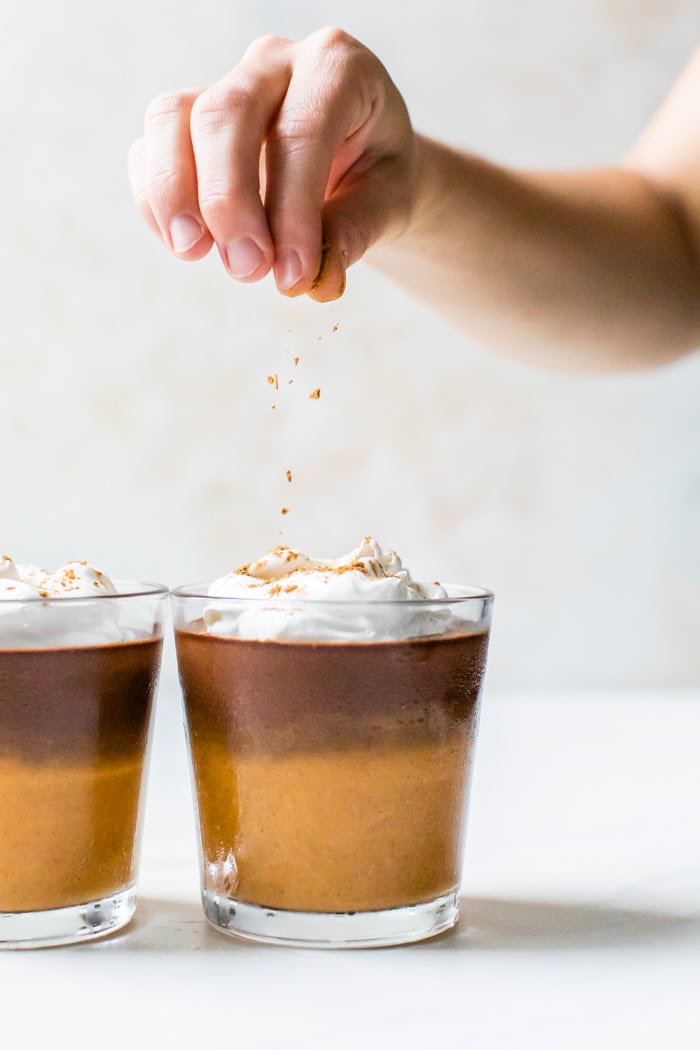 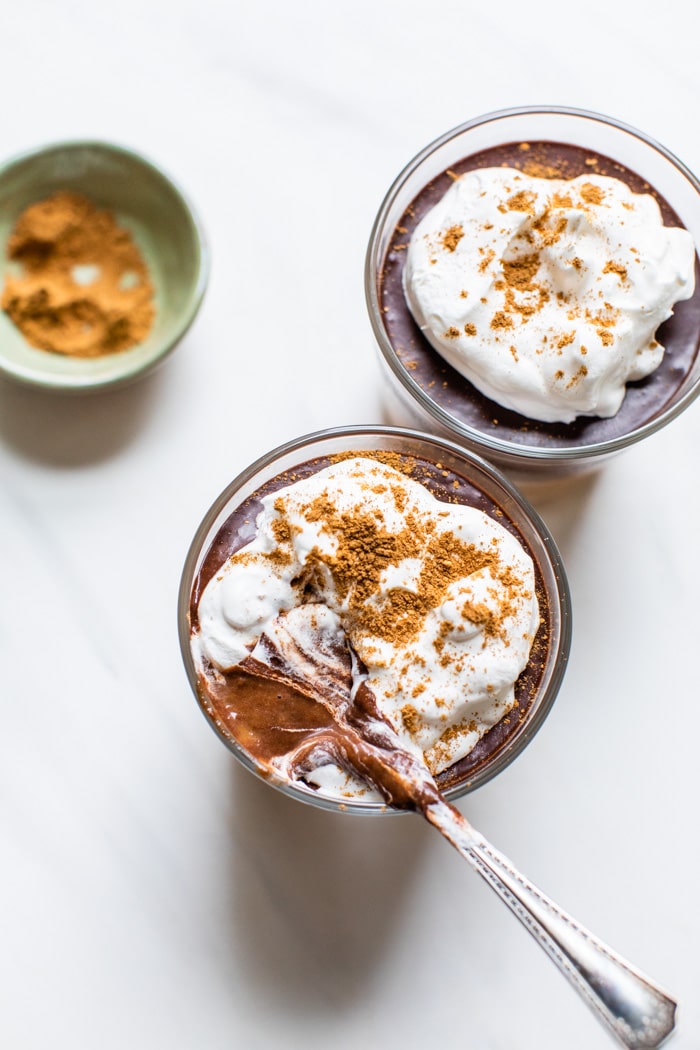 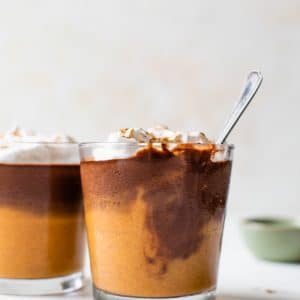 This Chocolate Pumpkin Pudding is made with better-for-you ingredients like banana, maple syrup, and yogurt, and the texture is spot-on. It can easily be made dairy free, and only requires 15 minutes of prep time!
5 from 5 votes
Print Pin Rate
Prep Time: 15 minutes
Cook Time: 4 hours
Servings: 2
Author: Erin

*The recipe calls for almond milk, but ANY milk will work. Same with the yogurt--if you don't want to use dairy free yogurt, you can use Greek yogurt instead.
Did you Make this Recipe? Tag me Today!Leave a comment below and tag @thealmondeater on Instagram!

Q: Did you start eating/drinking pumpkin too early this year? Have you ever tried TruWhip? <<that’s the whipped cream I used for these