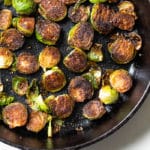 These Fried Brussels Sprouts are fool-proof and a perfect side dish to pretty much any meal. They’re fried on both sides, then baked in the oven, so they’re crispy on the outside but soft on the inside, aka the perfect texture! 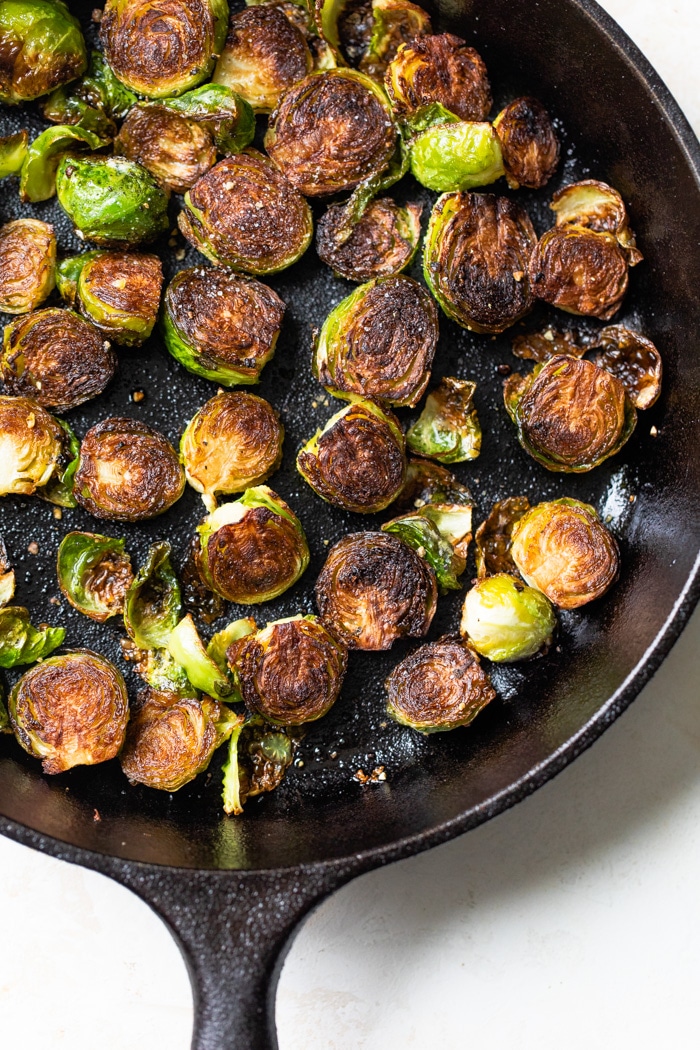 Believe it or not, these would be a great side dish at Thanksgiving! I know everyone wants green bean casserole (link), but adding brussels sprouts to the mix might not be the worst idea, ya know?

WHY THESE FRIED BRUSSELS SPROUTS ARE THE BEST

HOW TO MAKE FRIED BRUSSELS SPROUTS

First, you need a quality skillet. I LOVE using my cast iron skillet because I think it gets them even crispier, but any oven-safe skillet will work.

Anytime you fry anything, you need oil. My go-to oils tend to be olive oil and avocado oil because they have a neutral flavor (vs. coconut oil, which can sometimes make food taste coconut-y). So, you’ll add oil to the skillet and turn the heat to medium. At the same time, heat your oven to 400° (more on this below).

While the skillet is heating up, chop the brussels sprouts. Start by cutting off the ends, then slicing them in half, removing the outside leaves and placing them cut side down directly into the skillet. Fry for 5 full minutes before using kitchen tongs to flip them over, frying them on the other side for 1 minute. 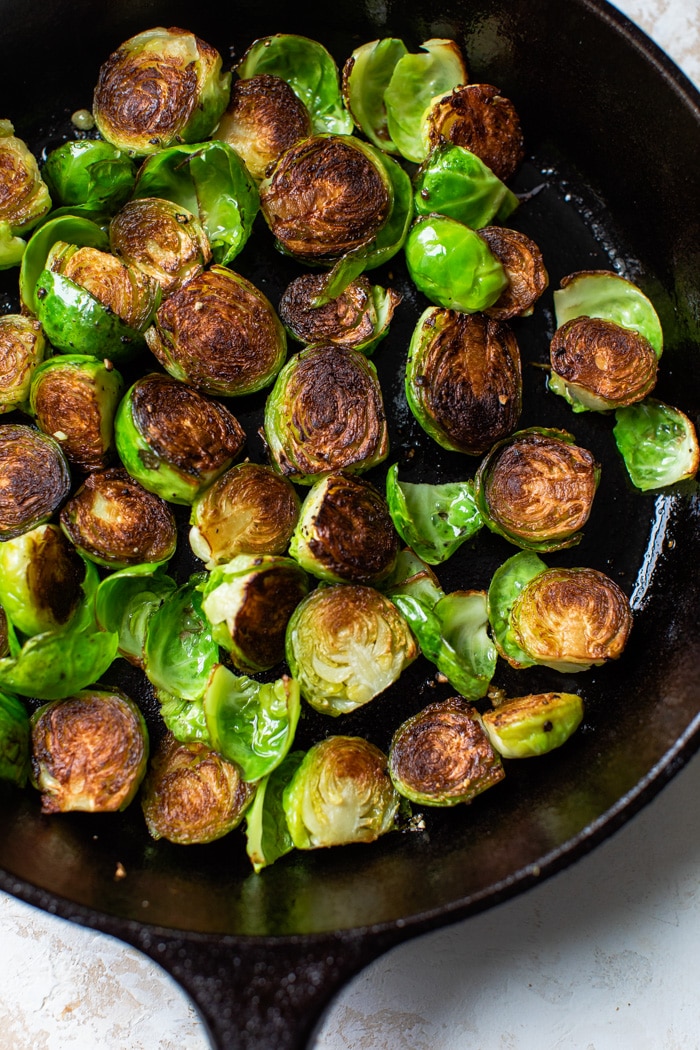 At this point, the sprouts are good and fried; however, I also like to place them in the oven to fully cook. The best brussels sprouts are crispy on the outside and soft on the inside, and baking them will allow them to become the perfect texture. So, once they’re fried, place the whole skillet directly into the oven and cook for 8-10 minutes or until the sprouts are to your liking.

Now, the sprouts are going to taste like brussels sprouts, so if nothing else be sure to add salt and pepper to flavor them. But, if you have a favorite sauce you like to use, simply pour the sauce directly into the skillet and the sprouts will absorb it. 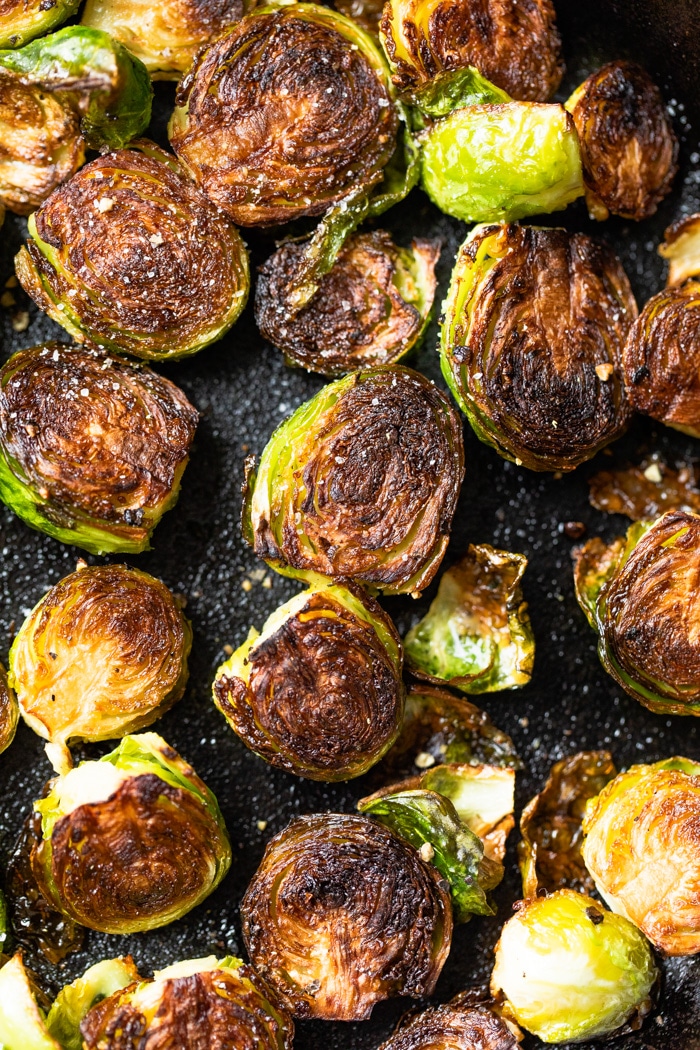 OTHER TASTY SIDE DISH RECIPES

I have joined up with a bunch of blogger friends for a Friendsgiving Virtual Potluck! Be sure to check the recipes below out for wonderful Friendsgiving and Thanksgiving recipe and craft ideas!

Drinks
Spiced Pumpkin Margarita from Sharon of Cupcakes and Cutlery 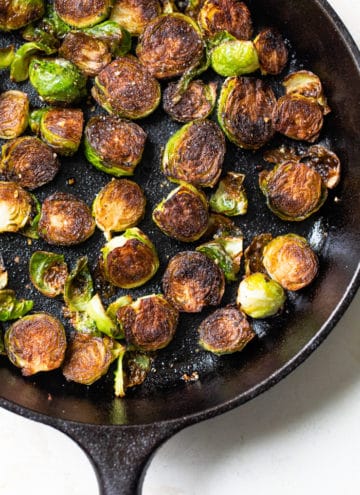 These Fried Brussels Sprouts are fool-proof and a perfect side dish to pretty much any meal. They're fried on both sides, then baked in the oven, so they're crispy on the outside but soft on the inside, aka the perfect texture!
Print Pin Rate
Prep Time: 5 minutes
Cook Time: 15 minutes

*Besides olive oil, avocado oil works too. You basically want a neutral-flavored oil so that it doesn't impact the taste of the sprouts.
Course: sides
Cuisine: American
Keyword: brussels sprouts
Author: Erin

I share recipes for ALL diet types because I believe that healthy food should be easy to prepare and incredibly delicious without being complicated. Learn more