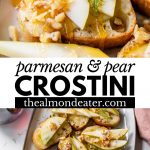 This Parmesan Pear Crostini is one of the quickest and easiest party appetizers! Toasted baguette slices are topped with melted parmesan, fresh pear, walnuts, and honey for a sweet and savory snack that’s perfect for any occasion.

Add a little elegance and some fanciness to the party with this Parmesan Pear Crostini appetizer. French baguette slices are toasted together with parmesan cheese, then topped with pear, walnuts, and honey. The best part is this sweet and savory snack only takes 20 minutes to put together!

This easy crostini appetizer fits in at any occasion, from holiday parties to casual get-togethers to birthday celebrations. It’s one of the best snacks to make when you’re in a rush because you only need a handful of simple ingredients and the toasts can be assembled right before everyone arrives. Just like my Classic Hummus Recipe and Caramelized Onion Dip, it’s the most perfect party snack!

Step 1: Make the crostini. Place the baguette slices onto a baking sheet and top each one with a slice of parmesan. Drizzle olive oil on top and bake.

Step 2: Prepare the toppings. Slice the pear and chop the walnuts while you wait for the bread.

Step 3: Assemble and enjoy. Take the bread out of the oven and immediately place 1 or 2 slices of pear on top of each piece. Sprinkle some walnuts on top, add a drizzle of honey, then serve and enjoy!

How do you make crostini?

Crostinis are really easy to make on their own. Once the baguette is sliced, drizzle some olive oil on both sides of the bread. Toast in a 350ºF oven for about 10 minutes, watching them carefully so they don’t burn. When the crostini are done, you can store them in a sealed container at room temperature for up to a week!

How many pear crostinis should I make?

Think about how many people are coming over and if you plan on serving more food along with these canapes. If you’re putting out more snacks, like a cheese plate or bacon-wrapped dates, then plan to serve each guest 3 to 4 crostinis. If you only plan on serving this pear crostini recipe, then make enough to serve 5 to 6 crostinis per person.

Can you make these ahead of time?

Because the cheese and crostini are baked in the oven together, I don’t recommend toasting the crostini ahead of time. Instead, save time by slicing the baguette and cheese up to 1 day before serving. Keep the bread slices in a sealed ziploc bag at room temperature and the cheese in an airtight container in the fridge. 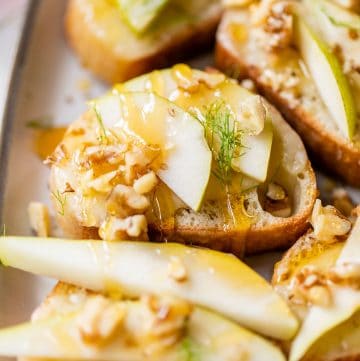 *Calories are for 1 slice of bread and are an estimation *Make sure to place the pear slices onto the cheesy bread as soon as it comes out of the oven; that way, the pears stick a bit better *Don't love parmesan? Try sliced gruyere instead.  *The fennel is optional but gives a bit of an anise flavor -- I personally love it but if that's not your thing just omit it.