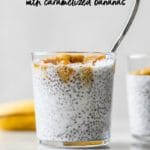 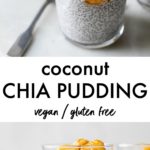 Coconut chia pudding that's made with coconut milk and shredded coconut then topped with caramelized bananas. It's requires just 4 ingredients, can be made in just 5 minutes and is full of fiber! 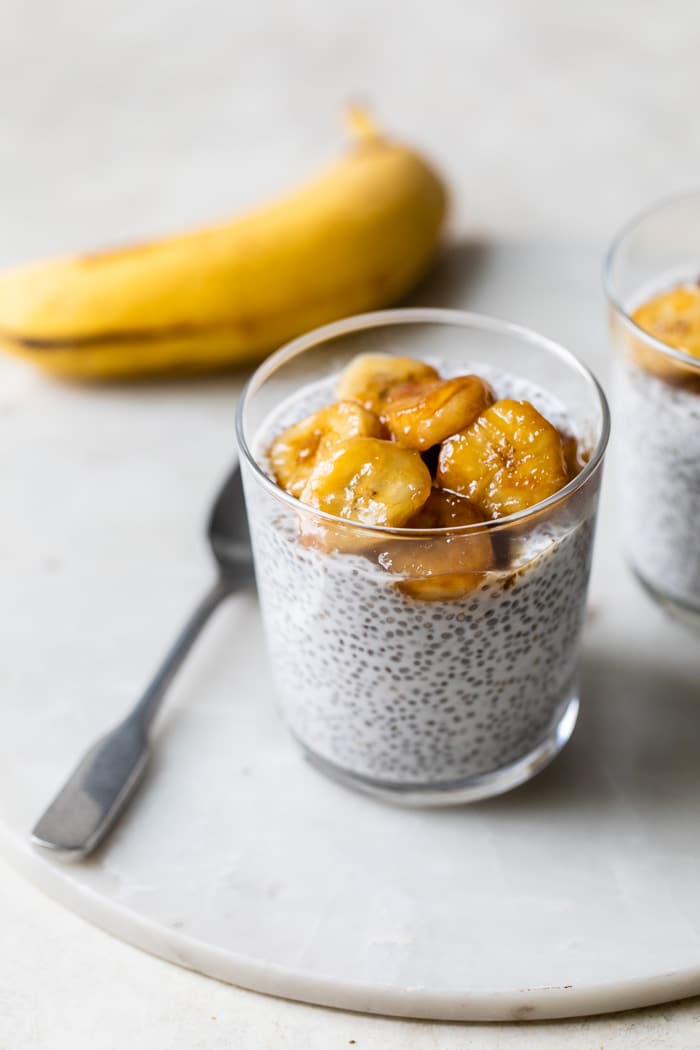 Sometimes I hate calling things my favorite, but this coconut chia pudding made with coconut milk is my favorite. Alongside this almond butter chia pudding of course. This recipe uses FOUR types of coconut for the ultimate coconut-y flavor, kind of like this coconut cake. The way I see it, the more coconut the better.

Why this chia pudding works 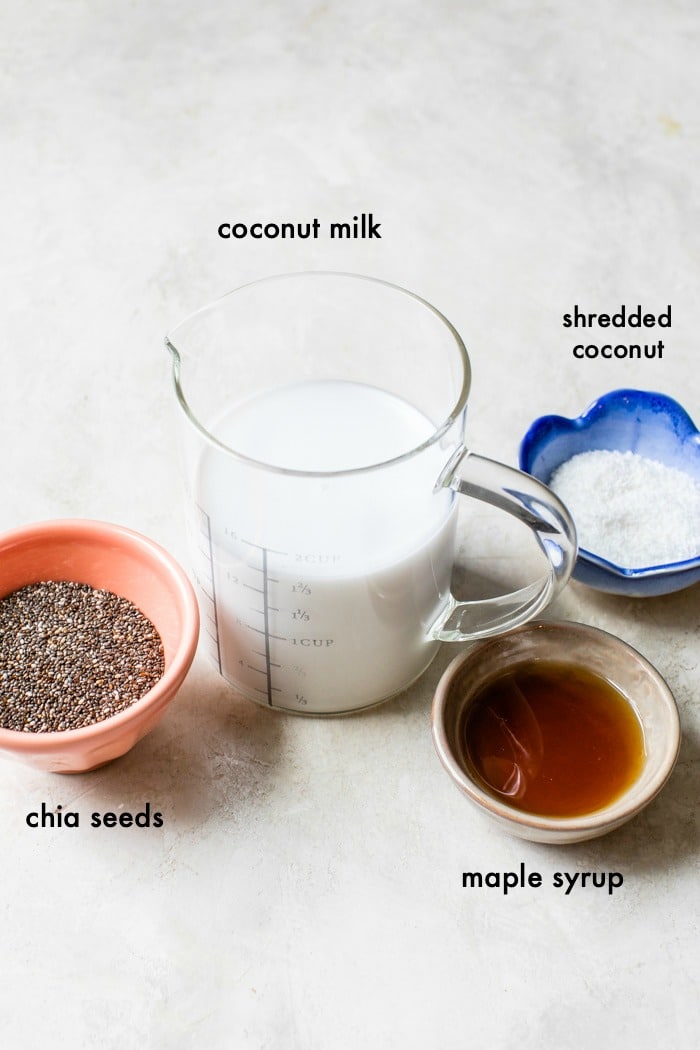 Coconut milk: I used canned full fat coconut milk because I found that it's more flavorful, and the pudding solidifies much faster. If you use full fat milk, the pudding will be ready to eat in just 2 hours. If you use light milk, or coconut milk from a carton instead of a can, it'll take closer to 8 hours, so I recommend refrigerating overnight.

Chia seeds: Black or white chia seeds will work in this recipe.

Maple syrup: This pudding needs some sort of sweetener, so a little maple syrup goes a long way. You can also substitute honey if you prefer.

Coconut: Since the recipe is sweetened with syrup, you don't need to buy sweetened coconut, especially if you plan on making the caramelized bananas on top (which will add extra sweetness). Unsweetened shredded coconut works perfectly!

1. Whisk the coconut milk and maple syrup together in a bowl, then add in the shredded coconut and chia seeds and whisk until everything is combined. 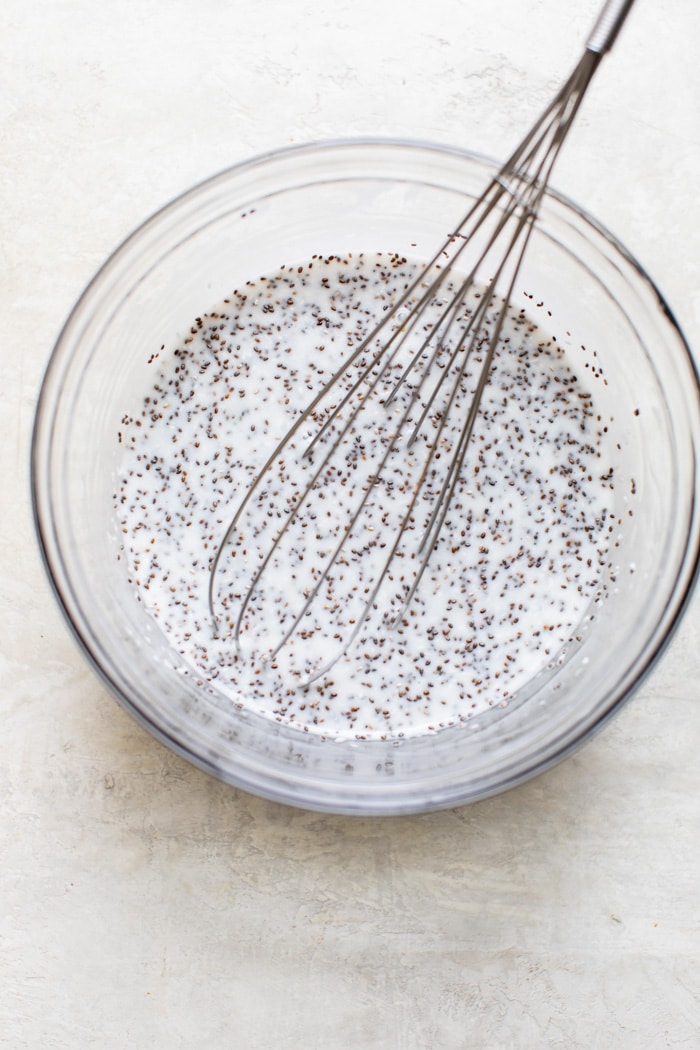 2. Pour the mixture into two separate glasses or jars, then refrigerator the pudding for at least 2 hours, or overnight. When the pudding is refrigerated the chia seeds will expand, allowing them to absorb the milk which will create a pudding-like texture. 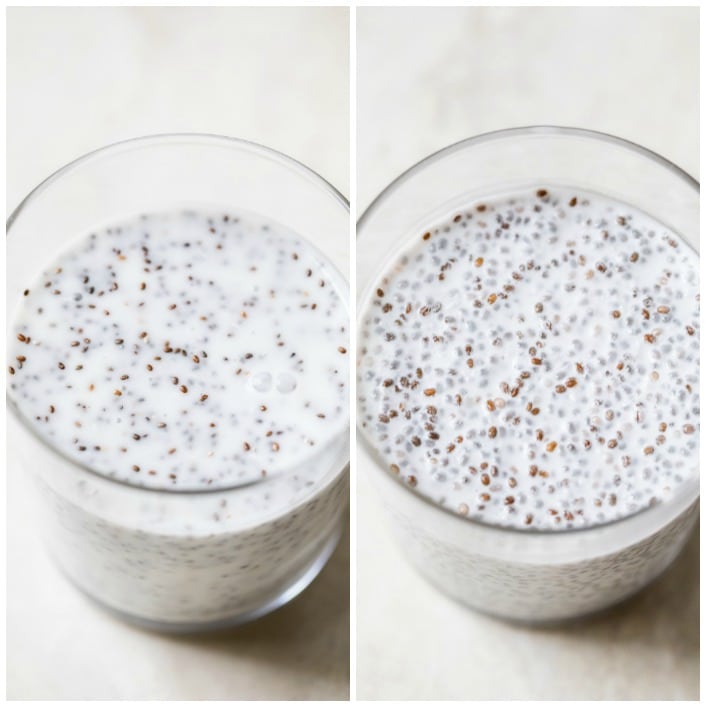 3. Before serving, make the caramelized bananas. Add coconut oil to a skillet, then add the sliced bananas and sprinkle the coconut sugar on top. Cook the bananas for 1 minute per side, which will result in golden caramelized bananas that pair perfectly with this chia pudding. 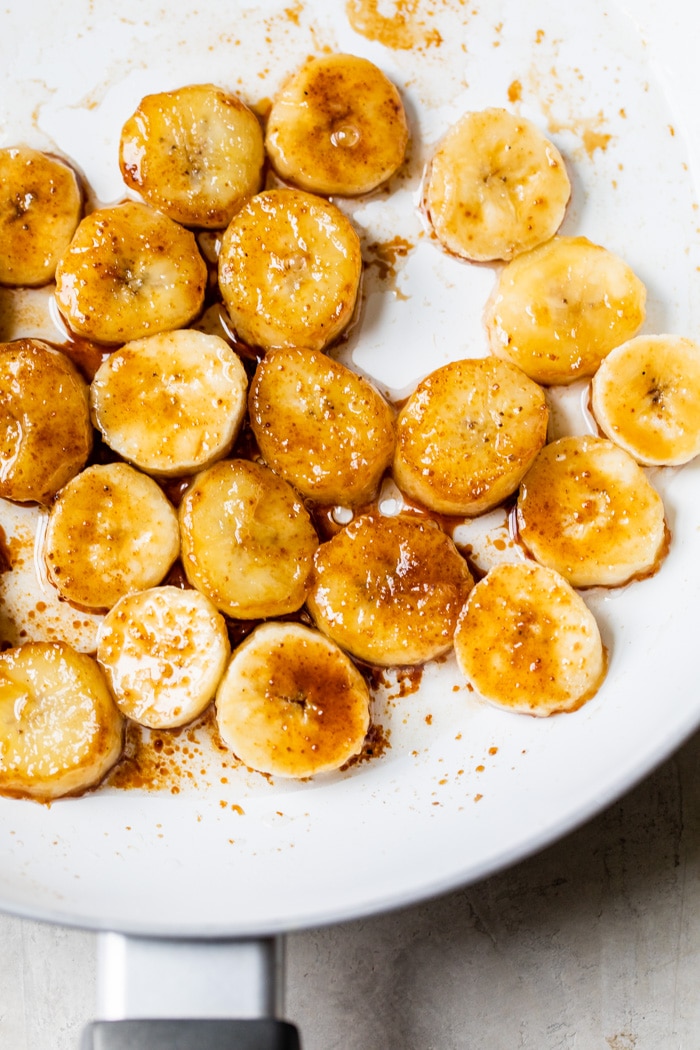 Substitutions: You can sub maple syrup for honey, and if you don't have coconut sugar to sprinkle on the bananas, don't worry about it. You can use regular cane sugar or brown sugar instead.

What kind of coconut milk should I use?

Do I have to add the caramelized bananas?

Not at all. The caramelized bananas make this pudding a little bit sweeter, and I think they take it to the next level flavor-wise. But, you can definitely omit them. Other topping ideas include: strawberries, blueberries, raspberries, pecans, walnuts, and/or almonds.

Video on how to make Coconut Chia Pudding 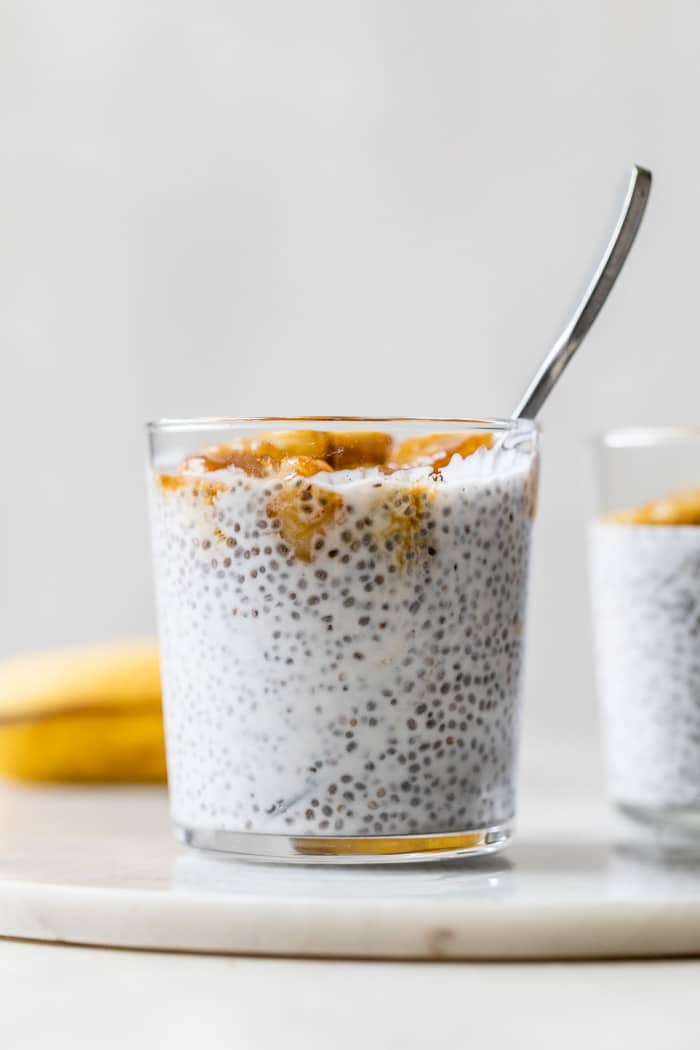 If you made and loved this recipe, be sure to leave a comment and star rating below! 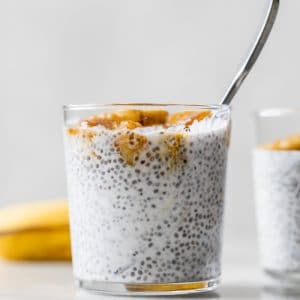 This chia pudding recipes uses coconut milk as a base and is made with just 4 ingredients, and you can easily take it up a notch by adding caramelized bananas.
5 from 6 votes
Print Pin Rate
Prep Time: 5 minutes
Cook Time: 5 minutes
Total Time: 10 minutes
Servings: 2
Author: Erin

for the caramelized bananas:

Substitutions: you can use honey instead of maple syrup, and you can use any kind of sugar for the caramelized bananas. If you don't have coconut sugar, try cane sugar or brown sugar.  I prefer full fat coconut milk because it's more flavorful and the texture is thicker, so the pudding solidifies more quickly, but light coconut milk works too. If you use light coconut milk, I recommend prepping this in the evening and refrigerating it overnight for at least 8 hours.  You don't have to add the caramelized bananas, I just think they add extra flavor to this recipe. Other topping ideas include: strawberries, blueberries, raspberries, walnuts, and/or almonds. *Calorie count is an estimation

UPDATE NOTE: This post was originally published in July 2019. It was updated with new text and photos in May 2020. 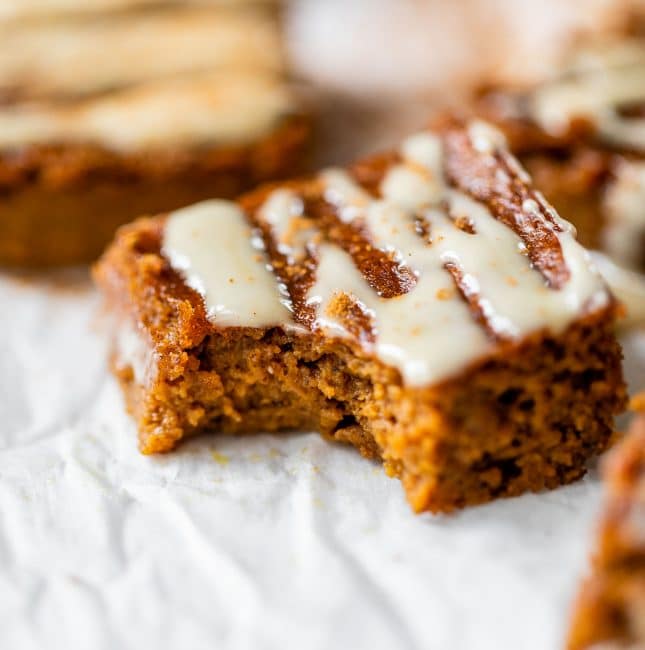