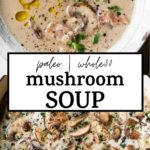 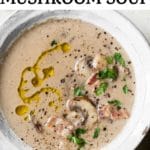 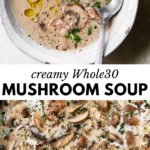 This creamy Whole30 Mushroom Soup uses coconut milk in place of dairy and is flavored with shallots, mushrooms and bacon. It's absolutely delicious and an easy make-ahead meal! 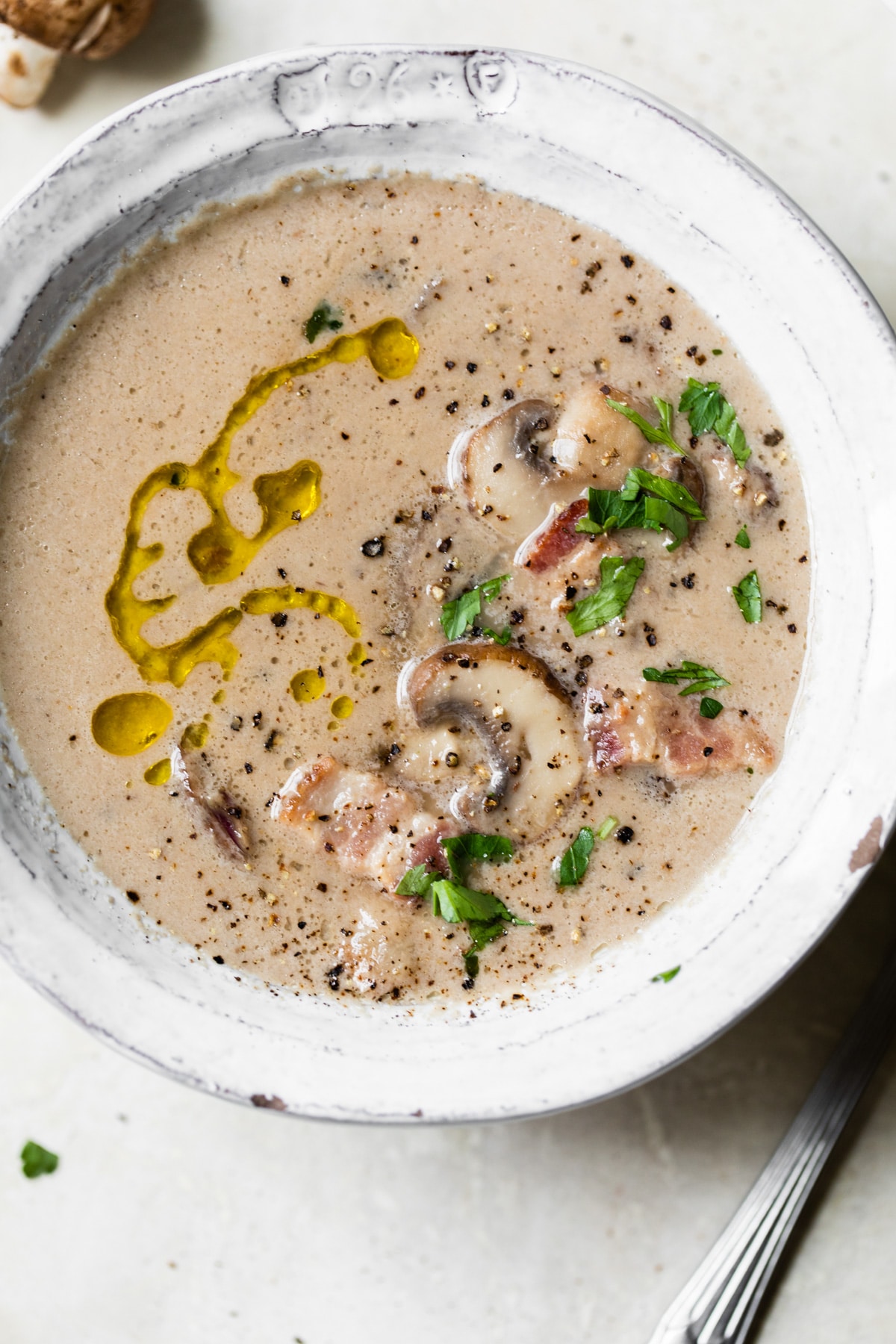 Soup season might just be my favorite season, especially when Whole30 mushroom soup is involved. If you're doing Whole30, I imagine you're probably looking for more recipes, right? I've done two Whole30's, so I know how important it is to switch it up.

If you are in fact doing a Whole30 or planning on doing one, be sure to check out my list of Whole30 dinners for more ideas.

I've never been a fan of canned mushroom soup, but homemade soup is a different story. This paleo cream of mushroom soup is to DIE FOR, and it makes plenty of servings so you're sure to have leftovers. 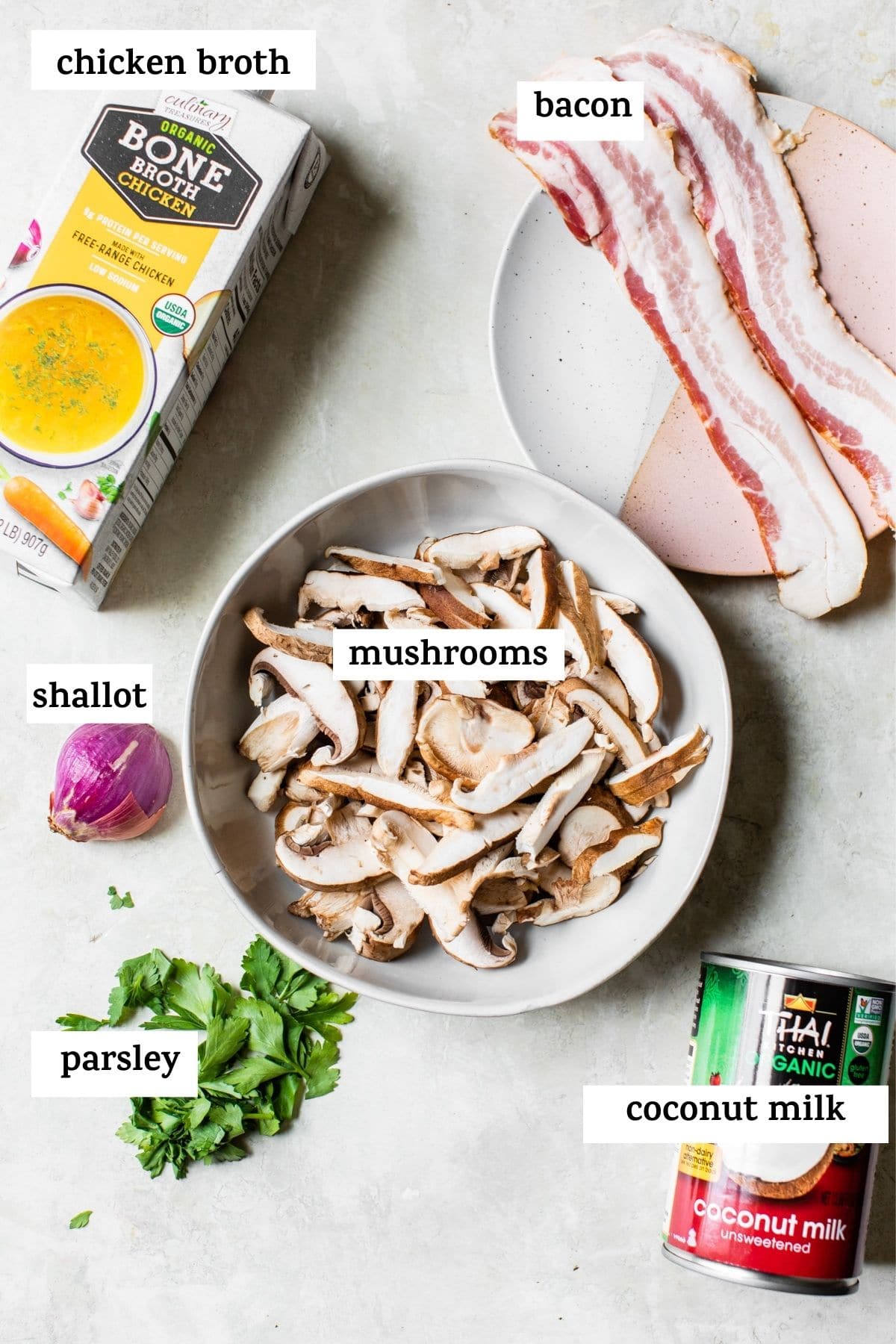 Mushrooms - I recommend using a mixture of mushrooms instead of all one kind. I used baby bella, cremini and shiitake.

Bacon - can sub sausage or pancetta

How to make mushroom soup

Step 2: Cook the mushrooms. Add mushrooms to the skillet and sauté over medium heat for 5 minutes or until they've softened. You may need to add extra olive or avocado oil to the skillet to help them cook down. 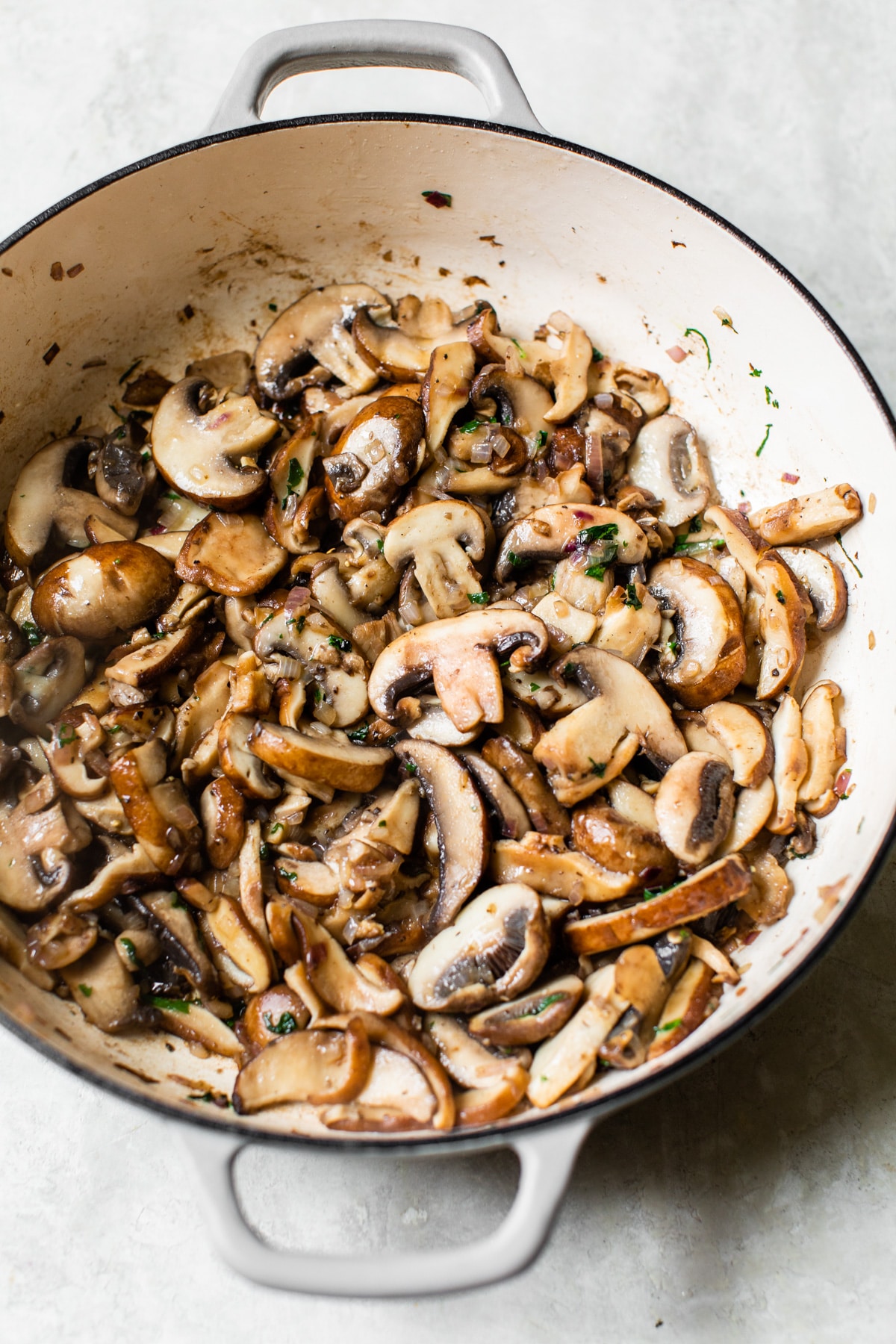 Step 3: Simmer. Pour in the broth and milk, then simmer the soup for 5 minutes or so.

Step 4: Blend it all up! Personally, I don't love soups that are fully cream-based, so I like to blend HALF of the soup, and then leave the other half as-is so there's still whole mushrooms in the soup. 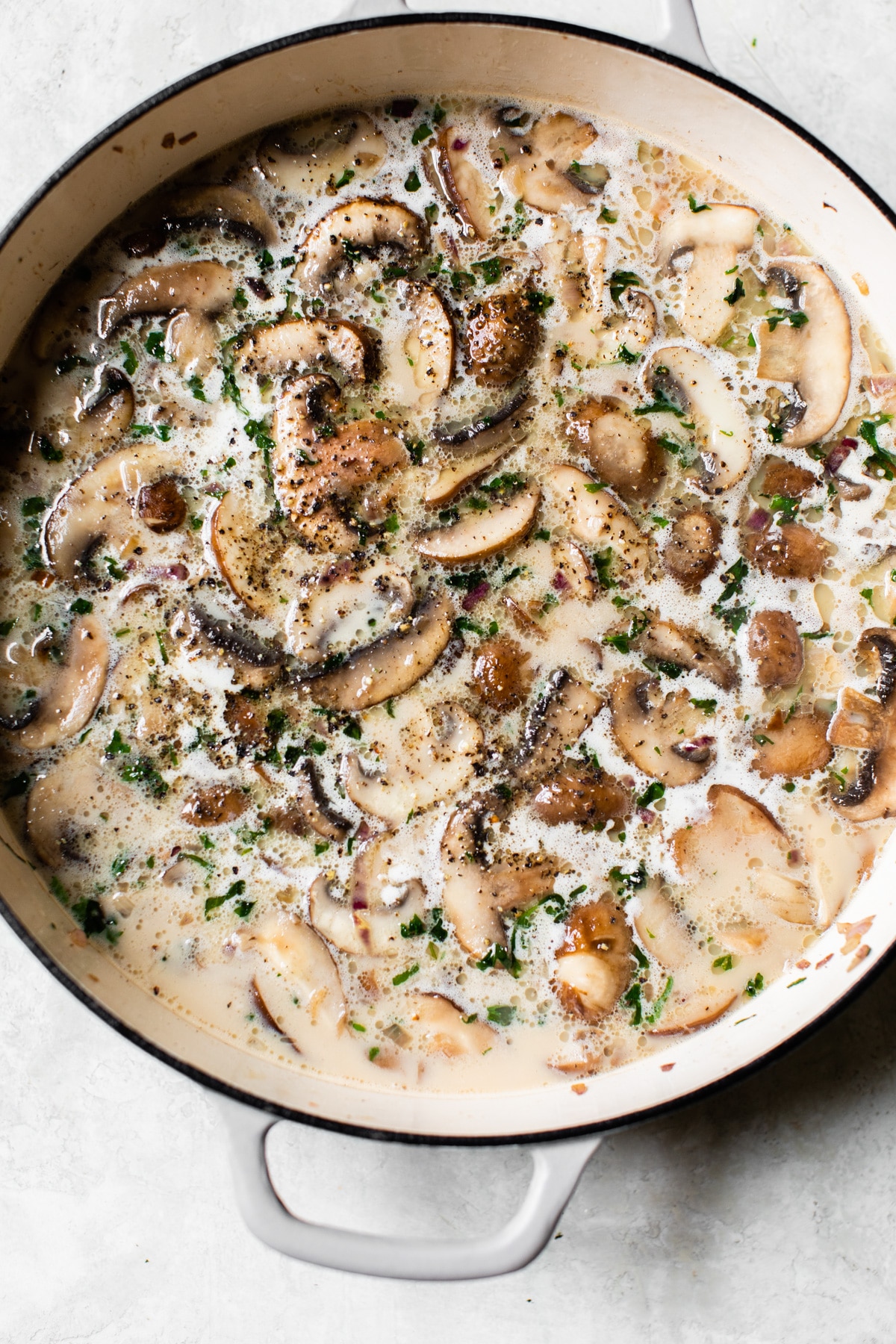 How should I store this?

Store the soup in an air-tight container in the refrigerator for up to 5 days, or you can freeze it for up to a month.

If you opt to freeze the soup, you may need to add extra bacon and/or black pepper to it to bring some of the flavor back (occasionally, some flavor may diminish if soup is frozen for an extended period of time). But, it should still taste good and texture-wise be spot on.

Do I have to use bacon?

Nope! If you don't want to use bacon, try using sausage or pancetta instead. I wouldn't omit it though, as the meat does add flavor to this soup. 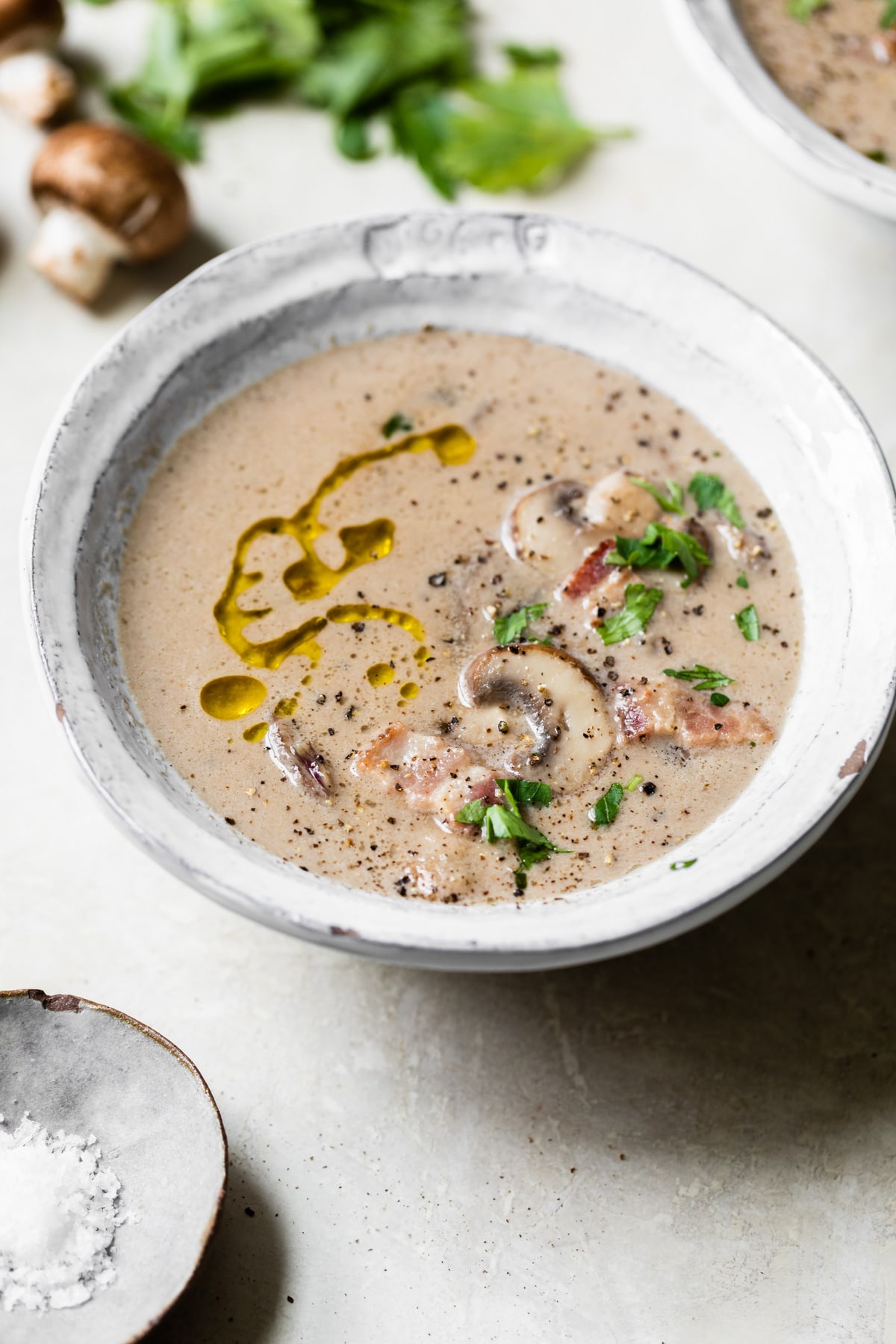 *Calories are per serving and are an estimation *If you're following Whole30, make sure the bacon is sugar-free *I used full fat coconut milk, but I imagine light coconut milk would work as well *If you don't want to use bacon, try using sausage or pancetta instead

UPDATE NOTE: This post was originally published in August 2017. It was updated with new text and photos in October 2020.