Enjoy the flavors of spring in this Nectarine and Blueberry Chia Pudding. Packed with protein and fiber, it will keep you full all morning long!

Today is the day—it’s the first day of spring! It’s not supposed to be particularly warm today, but tomorrow it’s supposed to be in the 60s! I already ranted about spring joys yesterday, but something I failed to mention was my excitement for spring/summer produce! I’ve said this before, but I don’t entirely pay attention to whether produce is in season or not. If I’m craving berries in the dead of winter, I’m going to eat berries. HOWEVER, I can definitely tell the difference in taste. Berries in summer are much juicer and, well, fresher than they are in the off-season. So perhaps I should say, bring on the juicy produce?!

Rather than talking about produce in general, I want to talk about blueberries and nectarines. I love all berries—strawberries, raspberries, blackberries, blueberries—I don’t discriminate. Nectarines, however, I often forget about. They’re juicy and kind of comparable to peaches, but with a more mild flavor. Regardless, they’re delicious and pair well with blueberries, especially in chia pudding.

Chia pudding is something that took some getting used to—not for the taste, but for the texture. If you’ve never tried it, it’s a bit interesting, but I actually really like it now..is that weird? It doesn’t really matter—what matters is that chia seeds have tons o’ protein and fiber so this pudding is the perfect breakfast to keep you full all morning long!

Side note: if I put on ‘Iron & Wine’ Pandora, Layla falls asleep within five minutes 99 percent of the time. It’s awesome. For example: she was just annoying me and running around the apartment and wanting me to play with her and I was like mmmmm NOPE, so I put on Iron & Wine and she just passed out. It’s actually pretty magical..kind of like this chia pudding…

This chia pudding is best if you let it refrigerate for at least six hours. Typically I’d recommend prepping it at night and eating it in the morning, but if you’re like me then you’ll prep it in the morning and eat it for dessert later that night. ….because I need something sweet at night and bluuuuubs (read: blueberries) and nectarines are just sweet enough. No matter when you eat it, it’s always going to be de-li-cious. Happy Friday!

PS- if you’re looking for more breakfast inspiration, check out my Lifehack article: 10 Breakfasts You Can Make The Night Before

Q: Do you like chia pudding? What about the texture? Is there any kind of trick to get your pup to calm down? 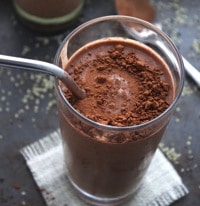