A tasty deconstructed Teriyaki Shrimp Sushi Bowl filled with rice, quinoa and avocado and then drizzled in spicy mayo. It comes together in a short 20 minutes, too!

What’s better than a homemade sushi bowl? Answer: actual sushi, but that’s not why we’re–you’re–here. You’re here to stare at photos and then get the recipe for this teriyaki shrimp sushi bowl.

I still remember the first time I tried sushi. It was when l I was 21 years old and I was visiting a friend in Cincinnati. She suggested we go out to dinner at a sushi restaurant that night, and I didn’t have the heart to tell her that I was scared to try it. So, I sucked it up, went out to eat, and ended up falling in love with sushi. Still to this day, my favorite sushi rolls are the extravagant ones, like the dragon rolls and the teriyaki rolls, specifically when they’re filled with shrimp.

How do you feel about sushi? If you’ve never tried it let me assure you, this sushi bowl is similar in flavor, but it contains COOKED shrimp, so you really have nothing to worry about. In fact, this recipe is fairly basic when you break it down…

Grains: this recipe calls for both quinoa and brown rice because I like variety and the two different kinds of tastes and textures. With that said, feel free to just use one or the other if that’s easier.

Shrimp: though sushi typically uses raw seafood, this bowl calls for cooked shrimp because marinated shrimp is THE BEST. Here’s the thing though… I opted to use store-bought marinade instead of homemade marinade. I KNOW, who am I? I’m someone who is typically too lazy to make my own sauce until that sauce is three ingredients or less. Hopefully you can relate? I found a delicious teriyaki sauce at Trader Joe’s, so I’m assuming most grocery stores sell some type of teriyaki sauce. Note: these sauces tend to be high in sodium, but the way I look at it is that the entire recipe calls for 1/4 cup, and it serves two people, so you’re really only consuming about two tablespoons of sauce. Not too bad if you ask me!

Mayo: you can’t forget the mayo! Even if mayo isn’t your favorite condiment (it’s certainly not mine), spicy mayo is on another level. It’s just mayonnaise and sriracha combined, but the result is delicious and like I said, way better than plain mayo.

Did I mention that I made this sushi bowl two days in a row? I did because it’s super easy to put together and quick, two things that are important to me when creating weeknight dinner recipes. I’ll also note that it wouldn’t be as quick if I had to make my own marinade. I’m just saying!

This shrimp sushi bowl is also topped with sliced cucumber and avocado, so don’t forget those. Have I convinced you yet? Please say yes. A major bonus is that this recipe comes together in just 20 minutes! 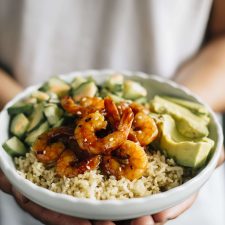