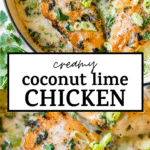 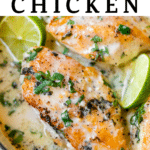 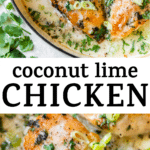 Baked Coconut Lime Chicken is a tasty weeknight meal that's made in one skillet and comes together in under 30 minutes. Chicken is pan-seared, then coated in a creamy coconut milk sauce and then baked to perfection.

What can I say? I've been on a real chicken kick lately. Normally, I tend to gravitate more towards salmon (hellooooo honey soy salmon) or even tofu (like in my spicy tofu enchiladas), but lately I've been really into chicken, specifically this creamy coconut lime chicken.

See, this recipe is a super easy weeknight meal, and it tastes a little savory and a little sweet. Trust me, coconut, lime and chicken DO pair well together!

Step 1: First, preheat your oven to 375°, then heat oil in a large, oven-safe skillet or dutch oven over medium heat. While the oil is warming, combine the flour and cilantro in a bowl, then dip each chicken breast into that mixture, placing it directly into the hot skillet.

Step 2: Next, pan-sear the chicken. You'll want to pan-sear it for 3-4 minutes per side, or until it's golden brown.

Step 3: While the chicken is searing, whisk the coconut milk, chicken broth, sugar, and juice from 1 lime together in a bowl.

Step 4: Add the garlic to the skillet and let it simmer for 30 seconds, then remove the skillet from the heat and pour in the coconut milk mixture. Place the entire skillet into the oven and bake the chicken until it's cooked through, about 10-15 minutes.

Step 5: Finally, drizzle the cooked chicken with the remaining lime juice, then sprinkle it with salt, pepper, extra cilantro, and a handful of chopped green onions.

Can I use chicken thighs instead?

Yup! I'd use boneless, skinless thighs, and you'll follow the same steps, but you'll bake the chicken for less time, probably closer to 5-8 minutes.

What should I serve this with?

This meal is delicious on top of rice, or with a side of vegetables, like Instant Pot broccoli or my easy fried brussels sprouts.

Can this be made gluten free/Paleo? What about Whole30?

Yes -- simply use arrowroot starch instead of all purpose flour to keep this recipe paleo-friendly. For a whole30 version, follow the above steps and omit the sugar. 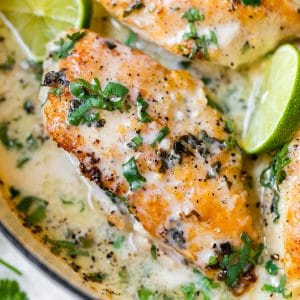 Baked Coconut Lime Chicken is a tasty weeknight meal that's made in one skillet and comes together in under 30 minutes. Chicken is pan-seared, then coated in a creamy coconut milk sauce and then baked to perfection.
4.98 from 37 votes
Print Pin Rate
Prep Time: 10 minutes
Cook Time: 20 minutes
Total Time: 30 minutes
Servings: 4
Author: Erin

*Calories are per serving and are an estimation *Cook times vary depending on thickness of chicken *Want this to serve more people? Simply slice the chicken breasts in half length-ways so you have 8 total breasts.  *To make this gluten free/Paleo, use arrowroot starch instead of all purpose flour.  *To make this Whole30, use arrowroot starch and omit the sugar in the recipe.

UPDATE NOTE: This post was originally published in April 2016. It was updated with new text and photos in September 2020.