This Spaghetti Squash Pasta is a healthy and delicious low carb meal. It’s made with garlic, tomatoes, pasta sauce, and topped with a bit of burrata cheese, and is surprisingly filling!

Spaghetti squash pasta is officially cool, and I’m not mad about it. If you haven’t tried it, it’s similar to regular pasta but it’s a vegetable, making this recipe both paleo and gluten free.

It’s spaghetti squash season, and I can say that I’ve been eating my fair share of it. I like that spaghetti squash doesn’t have a ton of flavor on its own, so I’m able to add whatever flavors I please, like caramelized onions. YUM.

I debated whether or not to add cheese, but ultimately decided that cheese is always the answer. With that said, just know that the cheese is completely optional. Like I said, this spaghetti squash recipe is just like regular pasta in that it’s all the good stuff minus the carbs. I mean, I love carbs, but sometimes it’s nice to have a low carb meal.

HOW TO MAKE SPAGHETTI SQUASH PASTA

Roast in the oven: If you’ve ever made spaghetti squash, you know that it needs to roast for 40-45 minutes. To do this, slice the spaghetti squash length-ways, then brush olive oil on both sides and place it face down onto a parchment-lined baking sheet.

Sauté tomatoes and garlic: This part doesn’t take long, so you don’t need to actually start until the squash only has about 10 minutes left to roast. Essentially, you’ll sauté the garlic and tomatoes until the tomatoes burst, around 3-5 minutes.

I’ve made this recipe THREE times already that’s how much I love it. It’s low carb, vegetarian and topped with cheese–what’s not to love? If you’re a fan of regular pasta, you should absolutely give this spaghetti squash pasta a shot and then tell me about it!

If you make this recipe, I’d SO appreciate if you could leave a comment and star rating — thank you! 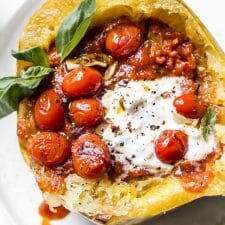