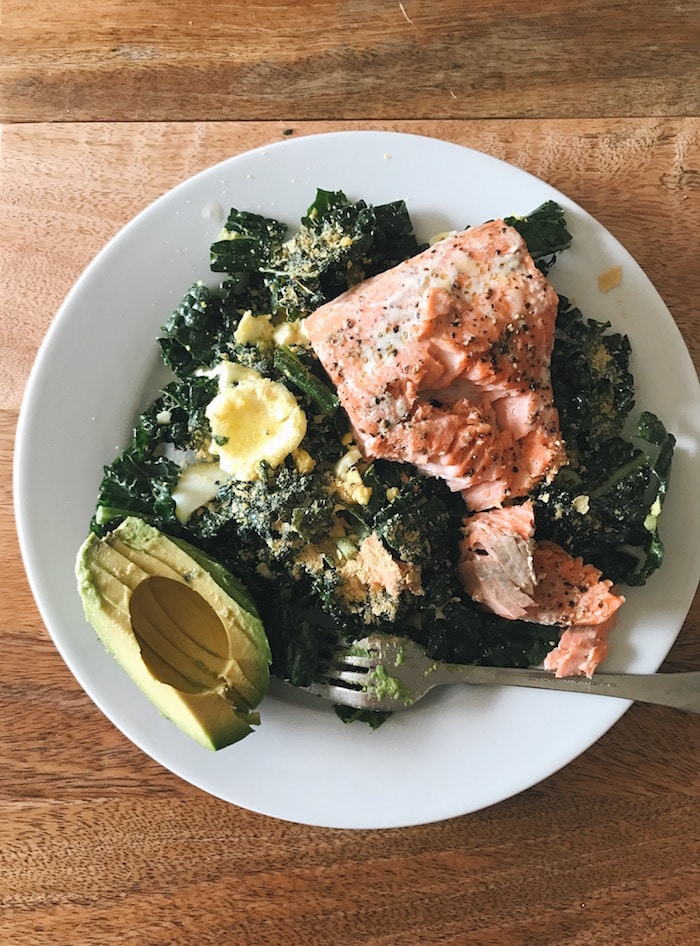 I’M DONE. It’s over, I made it and clearly I need to share my Whole30 thoughts with you all.

Something to note before I get into Whole30 is that I’m not really into diets. I don’t believe in calorie counting or food restriction or labeling food as “good” or “bad”. No, I believe in food freedom and eating the foods that make you feel good literally (hi kale) but also mentally—the foods that are good for the soul (aka REAL DESSERT)—and everything in between.

In case you missed it, the reason I decided to give Whole30 a try are as follows:

One: I have a mild headache every single day in my sinuses, and I was curious to see if it was at all related to food (more on this below!)

Two: I’d known for quite some time that I was consuming too much sugar, so I wanted to see if I could even make it the full 30 days with only eating fruit sugars.

So let’s get to it. Truthfully, the first few days were tough. I was craving sugar like crazy, I felt really hungry despite the fact that I was eating every 2-3 hours and I found myself eating a handful or two of dates every single night to make up for the sugar I wasn’t consuming. I know that’s not how you’re “supposed” to do it, but it worked for me and it was just to get me through the transition of no diet at all to a pretty extreme diet. I’d say it started getting easier after day 6; by day 6, I sort of had an eating schedule down pat both in terms of timing and what I was going to eat. 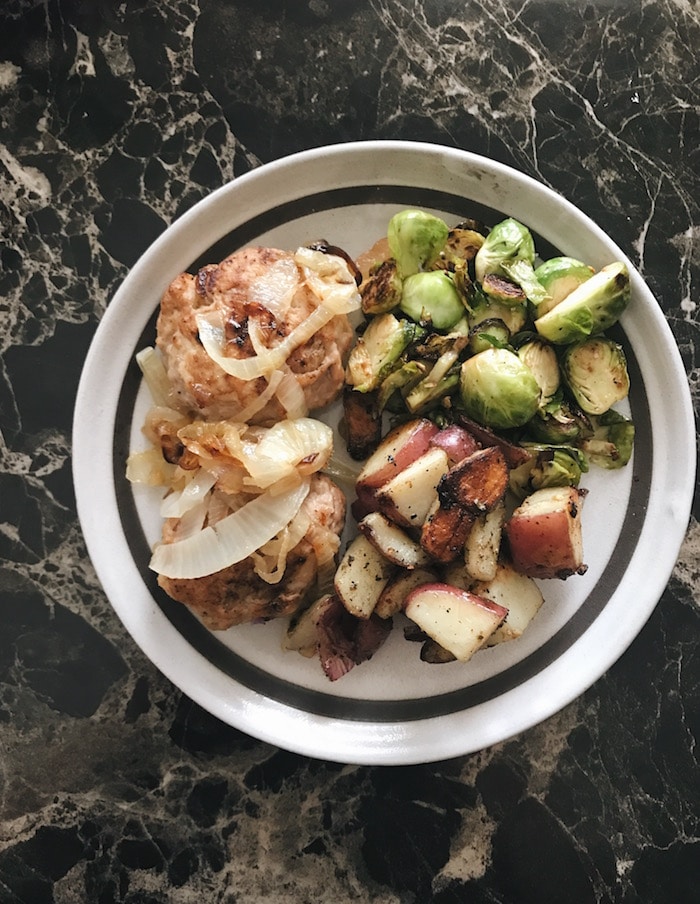 Ok so let’s get into a few common Whole30 questions..

Of course not every day was the same, but a typical day looked something like this: Breakfast- 2 scrambled eggs with a piece of chicken sausage and a big glass of water | Lunch- a roasted sweet potato with whatever else I was making.. my lunches were never really traditional lunches, so I’d either eat whatever recipe I was working on or sometimes just a side of plantain chips or grapes or something like that | Dinner- dinner was typically some sort of protein (salmon, beef, chicken) with roasted vegetables and maybe cauliflower rice | “Dessert”- I’d usually end up drinking a smoothie after dinner. Truthfully, I didn’t realize smoothies were somewhat frowned upon in the program, which I sort of understand is you're making yourself a chocolate almond butter smoothie every night, but my smoothies usually consisted of banana, cauliflower, zucchini, strawberries, dates, chia seeds, and almond milk. …or something like that.

What food did you miss the most?

Honestly? Probably the piece of toast I usually eat with breakfast. I know that’s so weird, but I feel like it makes me feel fuller to have some type of carb with breakfast.

Well, are your headaches gone? Did it help at all?

Yes and no. I still have my daily headache located in my sinuses (not sinus or allergy related, either), BUT, since doing Whole30, I haven’t suffered a really bad headache. Before Whole30, I’d get 1-2 “bad” headaches a week, so I definitely feel like I’ve made some progress, though I guess now it’s up to me to figure out what exactly might be triggering them. At this point, I don’t think food is what’s causing the headaches, but I do believe certain foods can trigger them to be worse, if that makes sense. If food was the primary cause, I like to think they would have disappeared during Whole30, but since they didn’t, that’s where I’m at. 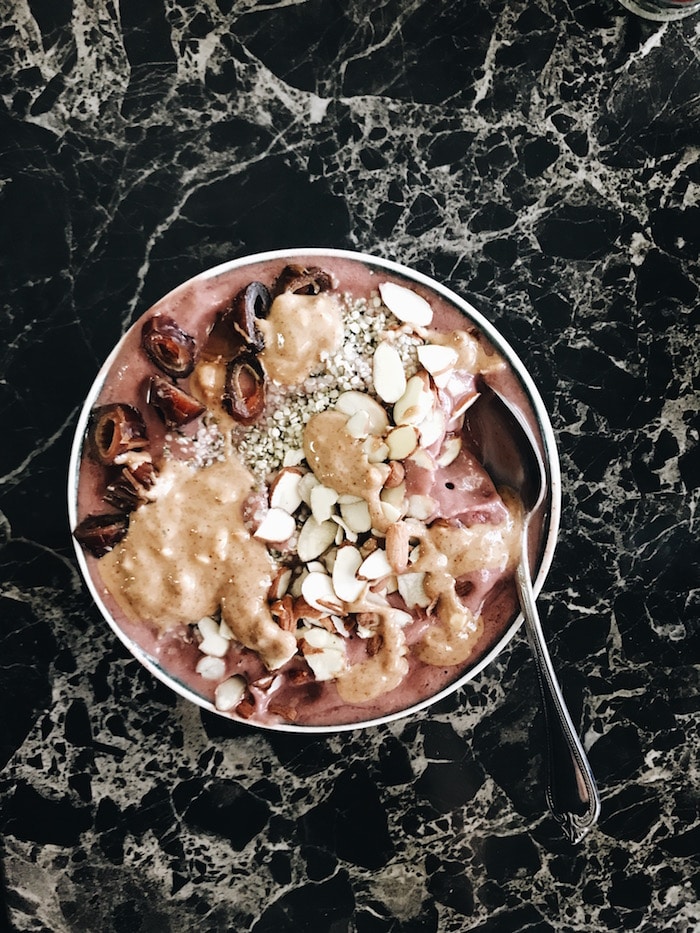 So, what are your overall thoughts on the program?

Great question. Between you and me, I liked the program a LOT more than I ever thought I would; prior to doing Whole30, I 100% judged everyone who did it. I’m sorry, but I did. It’s kind of ironic actually because I’m all “listen to your body—eat whatever you want!”, but sometimes doing a diet—whether it be Whole30 or something else—is listening to your body. HOWEVER—you knew there had to be downside—I think Whole30 is pretty restrictive, and if you currently have or have had a disordered way of thinking about food in the past, this program is NOT for you. The idea of labeling foods as “good” and “bad” still kind of irritates me—even throughout the program there were many times when I wanted to cheat because I found things to just be silly (like, no chickpeas….really?). But! If you’re doing it for a specific reason, maybe to help with digestive issues or to do somewhat of a sugar detox and you have a healthy way of viewing food, then yeah, I actually would recommend it, especially because it’s only for 30 days, or in my case, 28 days because I’m a rule breaker.

So what are the pros and cons? Well...

Pros: improved skin (during weeks 2 and 3 my skin was the best it's ever been in my life... though now it's pretty much back to normal--ha!), self awareness in regards to how much crap I eat instead of fruits and vegetables, it put me in the mindset to reach for an apple or plantain chips when I needed something to snack on instead of my usual entire bag of popcorn or an energy bar, I had zero digestive issues during the program (I don’t really have digestive issues but any little bit of bloating that I normally experience completely disappeared while doing the program)

Cons: strict, rigid, labels foods as “bad” which I hate, often had me paranoid about the next time I’d be eating and therefore I tended to over-eat to avoid the possibility of being hungry later (side note: though I was typically overeating on “good” foods aka potatoes, vegetables, etc., overeating is something I try to avoid pretty much always, so I hated the feeling of being overly full), and I guess the largest con for me was just the fact that I'm still getting headaches, though I wouldn't blame the program for that.

So that's that! Basically I'm a little bummed that I'm still getting the headaches, but I'm glad I did the program. I think my body appreciated the extra fruit and veggies and the mini sugar detox. Let me know if you have any questions below, and apologies for the long-ass post. Xoxo