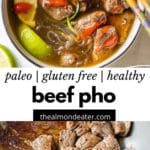 A quick Paleo Beef Pho recipe that's Whole30 compliant and completely delicious. It uses zucchini and kelp noodles to keep it gluten free, and it's full of flavor! 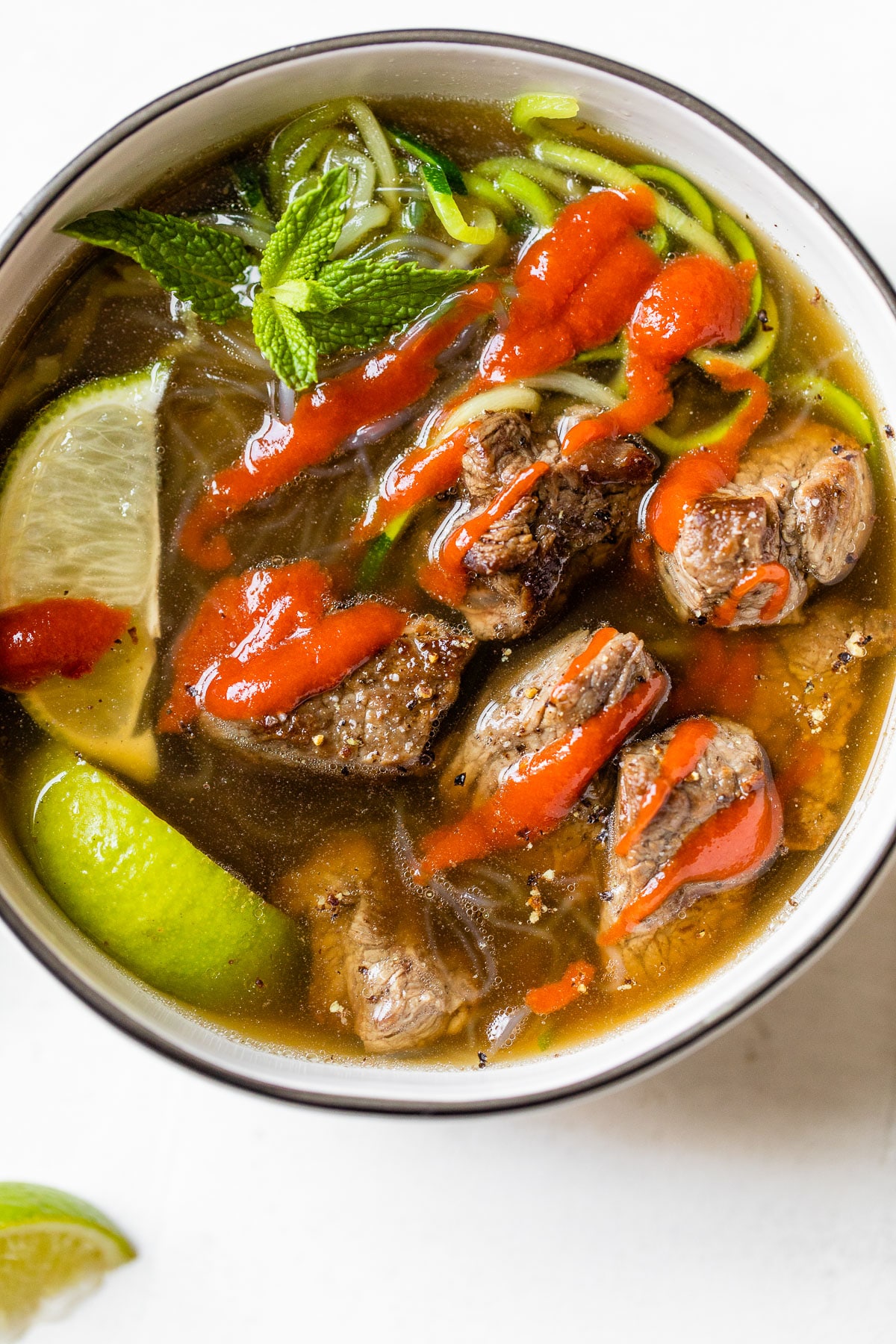 Even if you're not doing a Whole30, I think you're going to love this paleo beef pho. I've made it many times, and it really hits the spot when I'm craving an easy pho recipe.

What exactly is pho, you ask? Pho is a Vietnamese noodle soup that's pronounced "fuh" (not "faux"). My Recipes has a pretty good article on specifically what it is, but essentially it's soup made up of noodles, thinly sliced meat, spices, and broth. Aka, all the good stuff!

Of course I love my spicy sausage potato soup and my Instant Pot vegetable soup, but this beef pho is obviously different than those, though just as healthy! If you're looking for a warm, cozy soup recipe, you must give this a try. 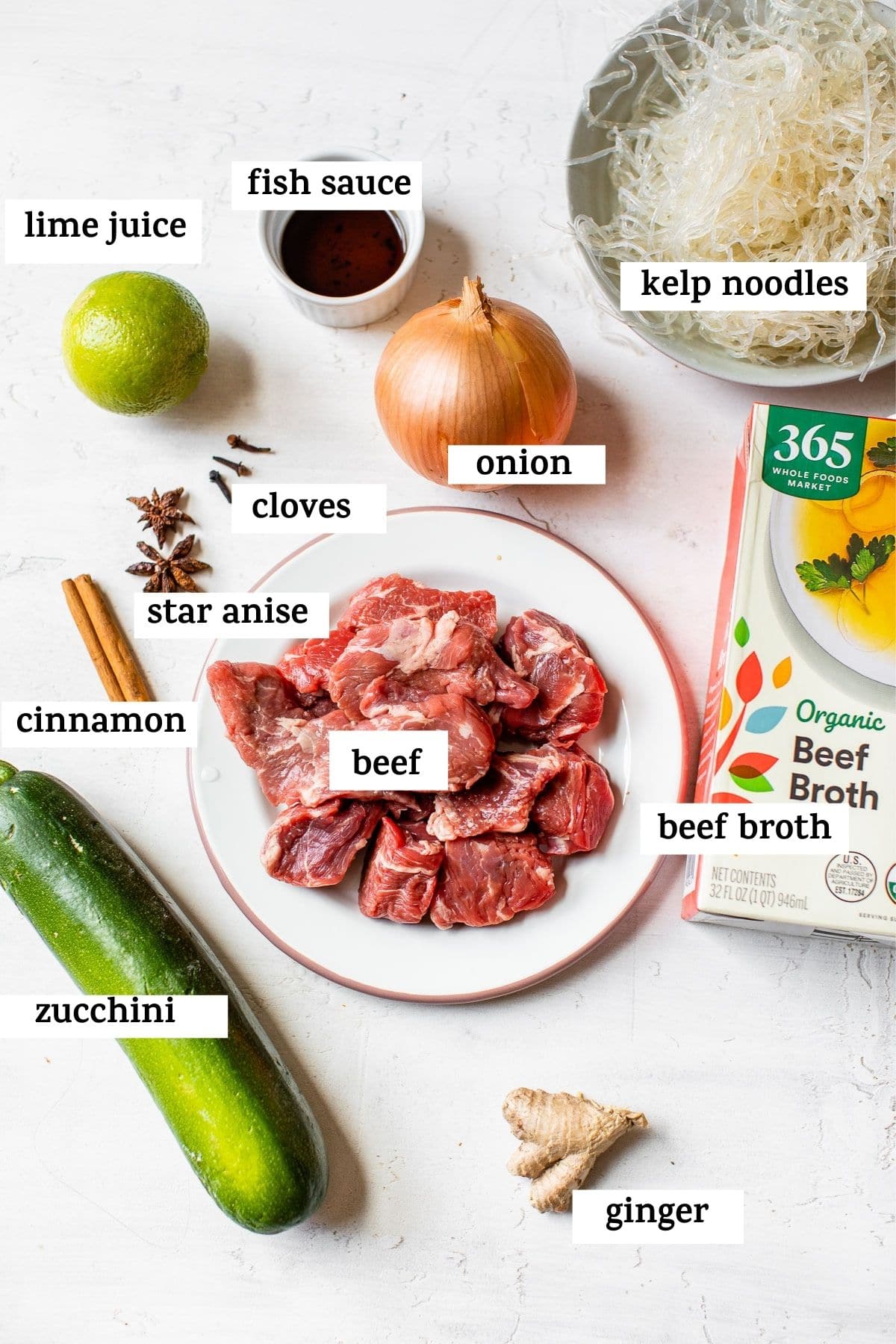 Beef - I used beef that's already cut -- At most grocery stores, it's normally called "beef stew meat". If you don't want to go that route, simply buy your favorite cut of steak and thinly slice it.

Zucchini - Since this is a paleo recipe, the zucchini replaces traditional rice noodles; you'll need a spiralizer to create zucchini noodles.

Kelp noodles - Kelp noodles make this dish a little more hearty than it would be if it only used zucchini noodles. You should be able to find them in the Asian food aisle at the store.

Spices - Cinnamon sticks, star anise, whole cloves -- all three are going to give this broth the BEST flavor -- don't skip any of them!

Step 1: Broil the onion and ginger. Add the diced onion and sliced ginger to a baking sheet, then broil them for 5 minutes, or until the onion starts turning golden brown on the edges. This step helps to bring out their flavor even more! 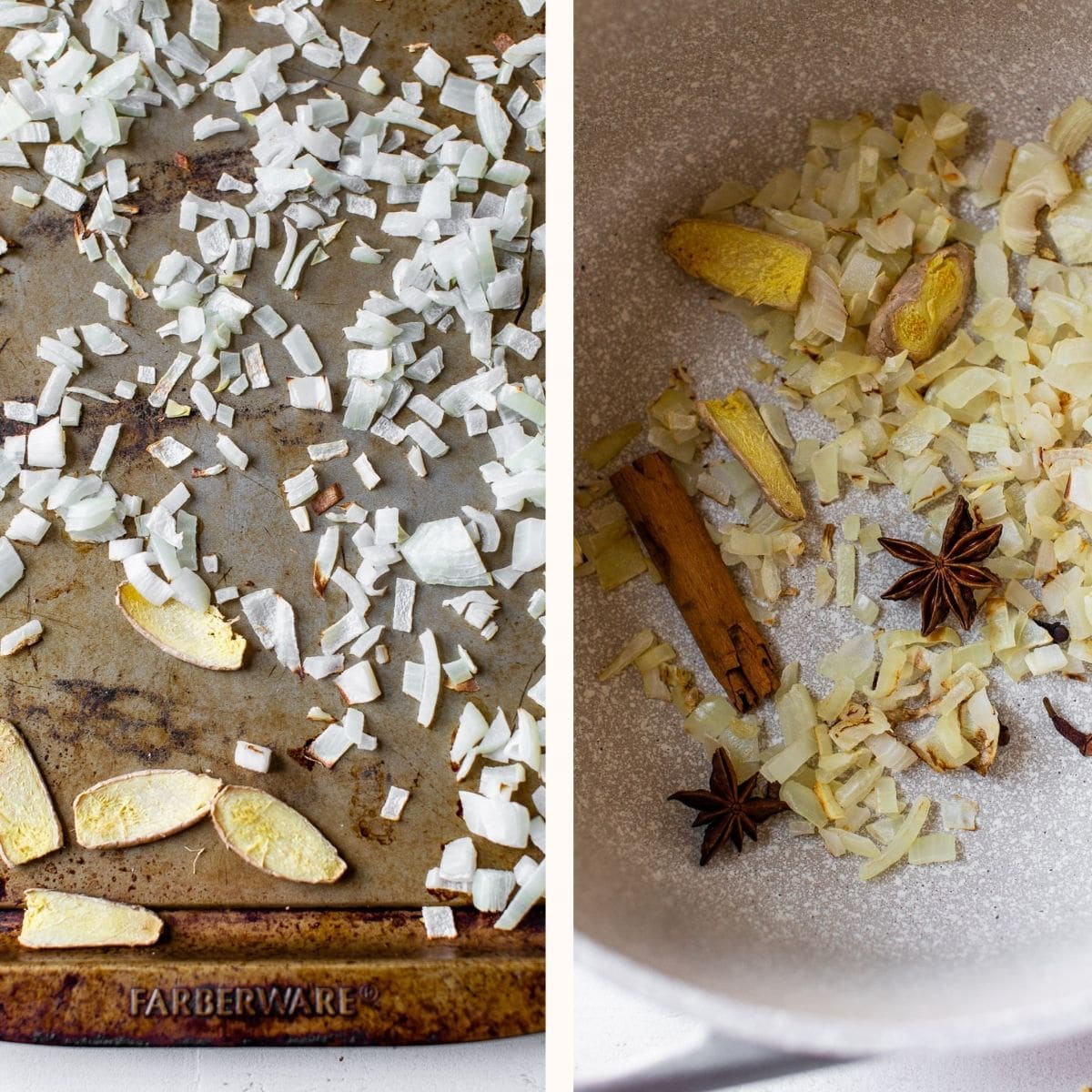 Step 2: Simmer the broth. Next, add the cinnamon stick, star anise and whole cloves to a large saucepan and heat over medium for 2-3 minutes, then add the broiled onion and ginger, and finally the fish sauce and beef broth. Simmer the broth for 15 minutes.

Step 3: Cook the beef. Season the beef with salt and pepper, then pan-sear it for approximately 2 minutes per side, then set it aside. 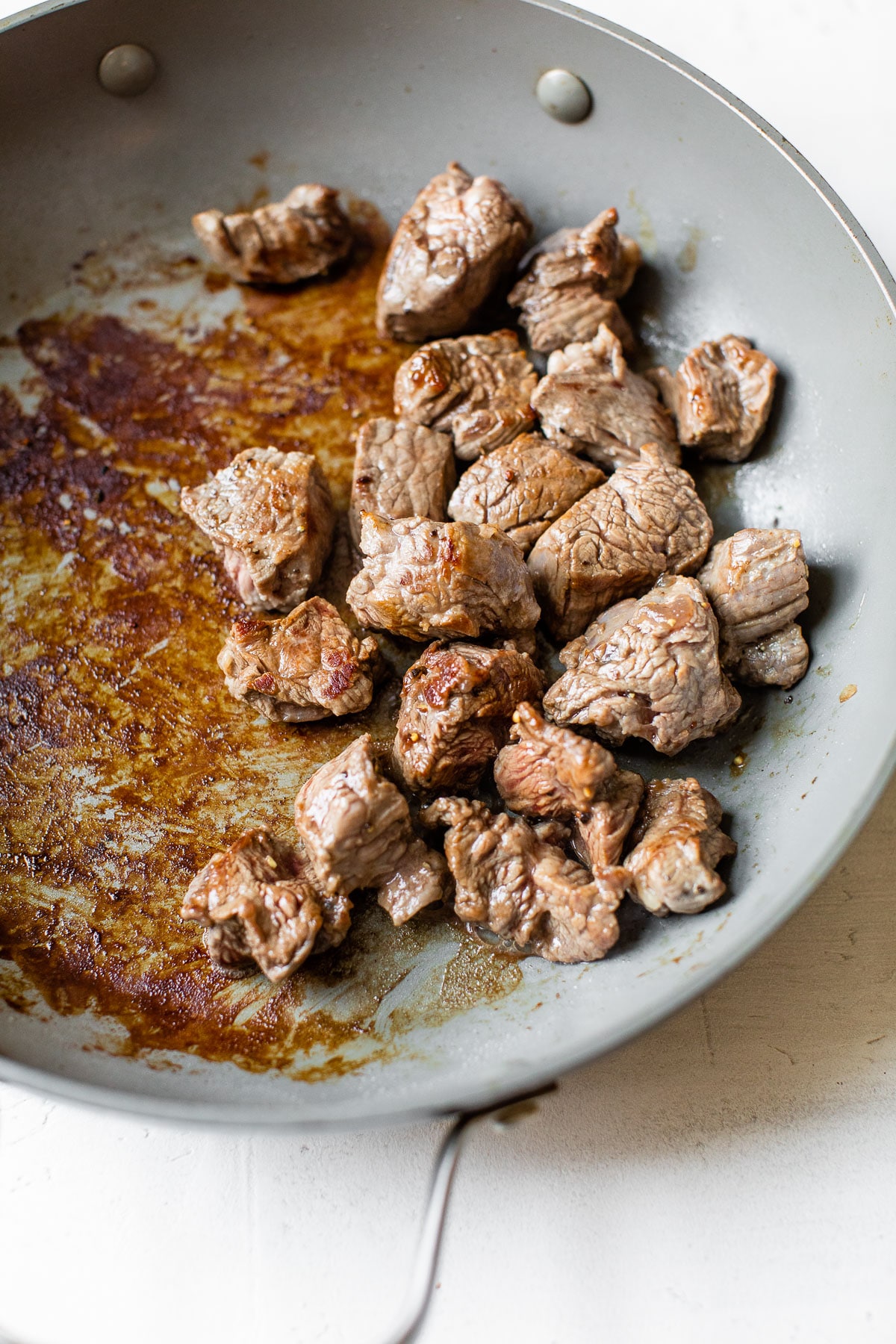 Step 4: Make the noodles. Run the zucchini through your spiralizer, then set it aside. Cook the kelp noodles according to the package instructions. Once there's only 1 minute left, add the zucchini noodles in with the kelp noodles. We want them to be slightly soft, but not soggy, so only cook them for 1-2 minutes. 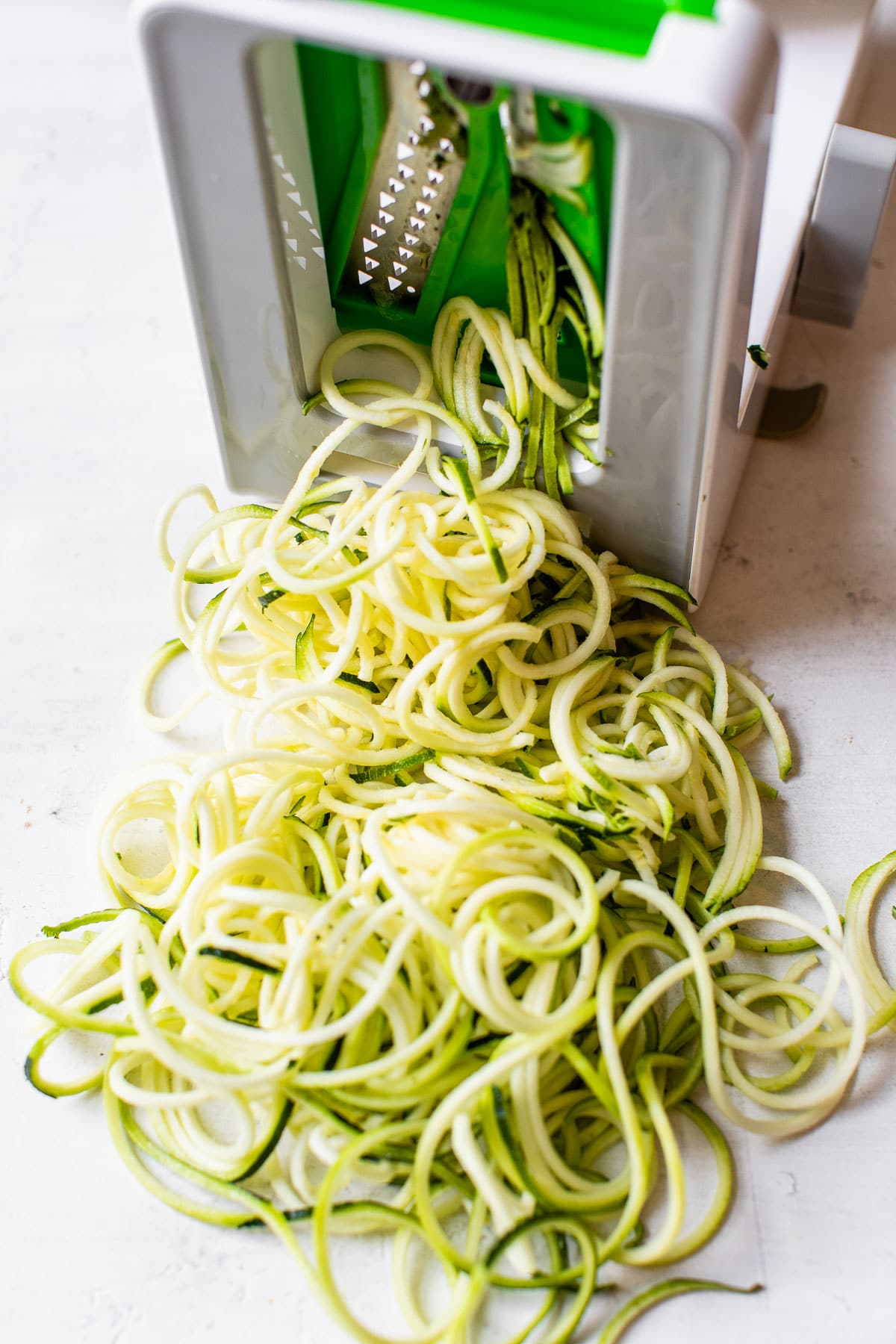 Step 5: Assemble. Strain the noodles, then divide them equally into serving bowls, then add the cooked beef on top. Strain the broth, discarding the chunks, then pour the strained broth over the noodles/beef. Top with mint/fresh basil/lime juice, and optionally sriracha. 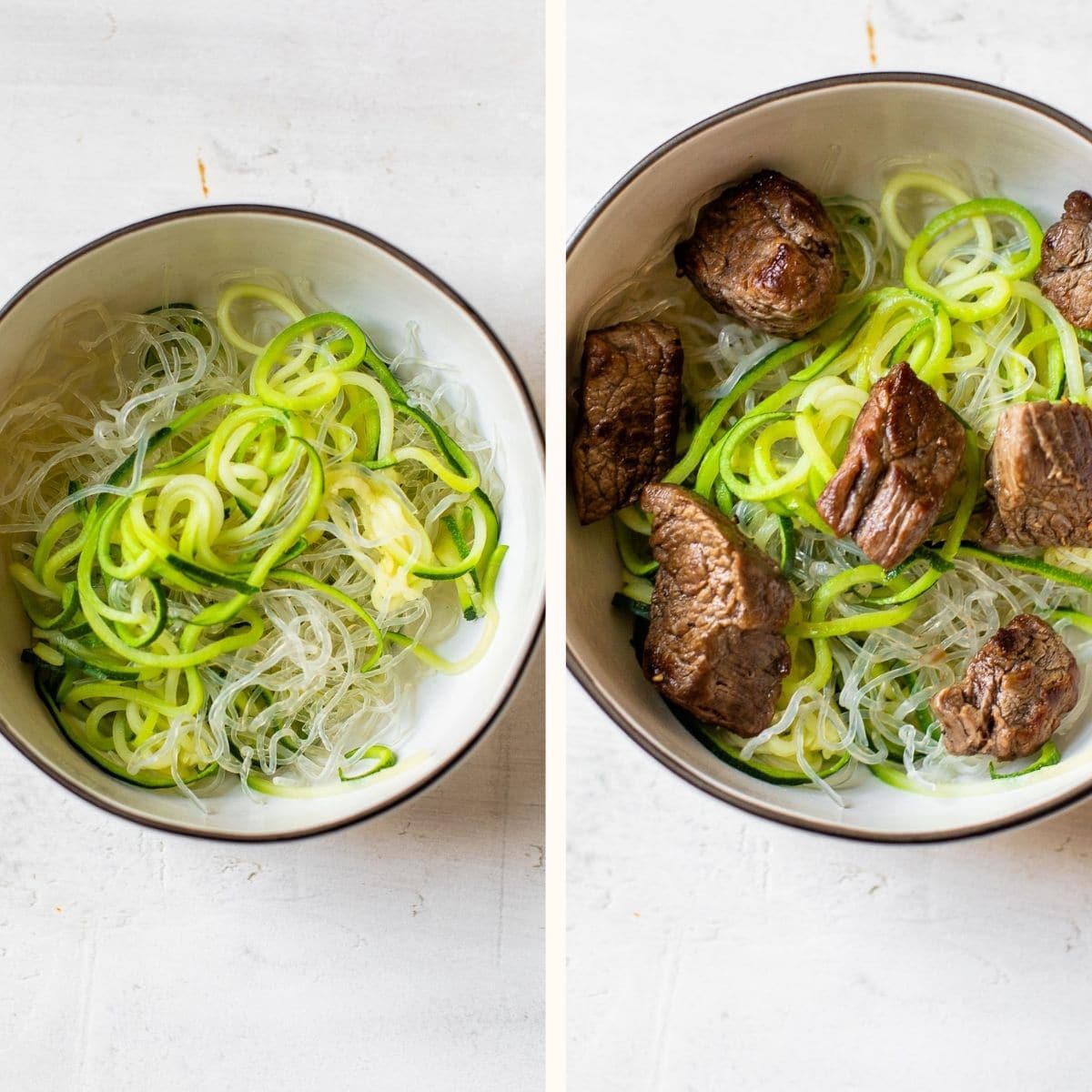 What toppings should I use?

Normally, pho is topped with any of the following: fresh mint, fresh basil, lime wedge/juice, bean sprouts, cilantro, jalapeño, and/or sriracha. So, any combination of those will work!

What makes this Paleo?

Normally, pho is made with rice noodles. But, since rice isn't paleo, I opted to use zucchini noodles and kelp noodles instead.

Do I have to use kelp noodles?

Nope! You can use only zucchini noodles if you prefer. Or, if you're not paleo, opt for rice noodles instead.

How should this be stored? 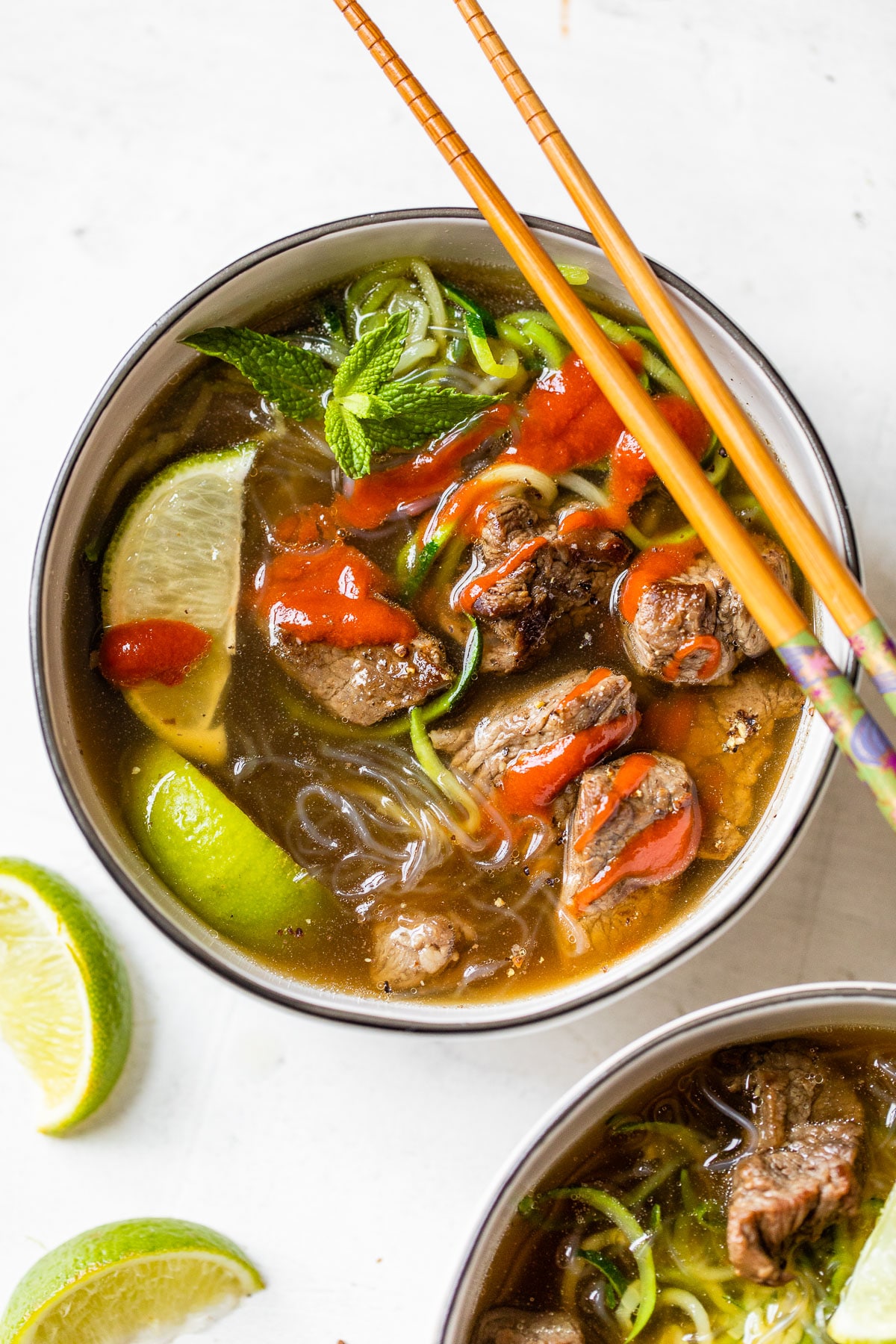 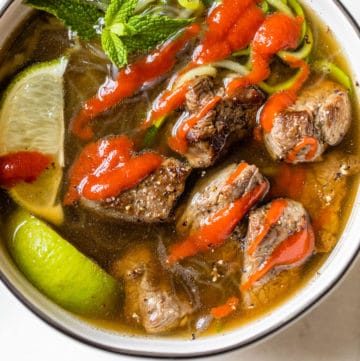 *Calories are per serving and are an estimation *To prep ahead: spiralize the zucchini, cook the kelp noodles, cook the beef; then, store them separately in sealed containers until you're ready to use.

UPDATE NOTE: This post was originally published in December 2016. It was updated with new text and photos in January 2021.