Say hello to summer with this Bacon Green Bean Salad made with broiled beans and cooked bacon and tomatoes.

BACON GREEN BEAN SALAD aaaaand tomatoes? Yes, ohhhhh yes. This is the perfect summer side! Trust me. Plus it’s July, so bring on all the beans and tomatoes.

I’m currently on the couch feeling a tad bloated from the weekend but also feeling so, so happy. I spent the weekend in Columbus for my friend’s bachelorette party and it was loads of fun. I got to see friends from high school I hadn’t seen in awhile, and it was great catching up and just having a girls weekend. I also stayed up until TWO IN THE MORNING Saturday night (errrr…Sunday morning?), which I hadn’t done in awhile. Wild and crazy, I tell ya.

But now? Now I’m ready to eat vegetables! Just like I am at the start of every week 😀

This bacon green bean salad is FANTASTIC. It screams summer and I wish I could eat it daily. If you own a grill, feel free to grill the green beans to your liking. I, however, do not own one (yet!), so I opted to broil the green beans in my oven until they were cooked to my liking, aka a little browned all around.

Meanwhile, you’ll cook the bacon in a skillet, then add the tomatoes to the skillet and then the tomatoes will be covered in bacon grease. …..YUM. Ok so this isn’t craaaaazy healthy, but it’s somehow better for you than cookies and cake and pizza. Or at least I think it is.

This bacon green bean salad is delicious on its own or would make an excellent side dish with some burgers. You know, cookout food aka summer food aka the BEST kind of food. 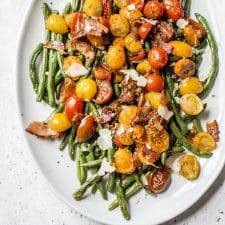