If broccoli soup is your favorite soup, you should absolutely whip up this Three Cheese Broccoli Soup made with cheddar, colby jack and gouda cheese. 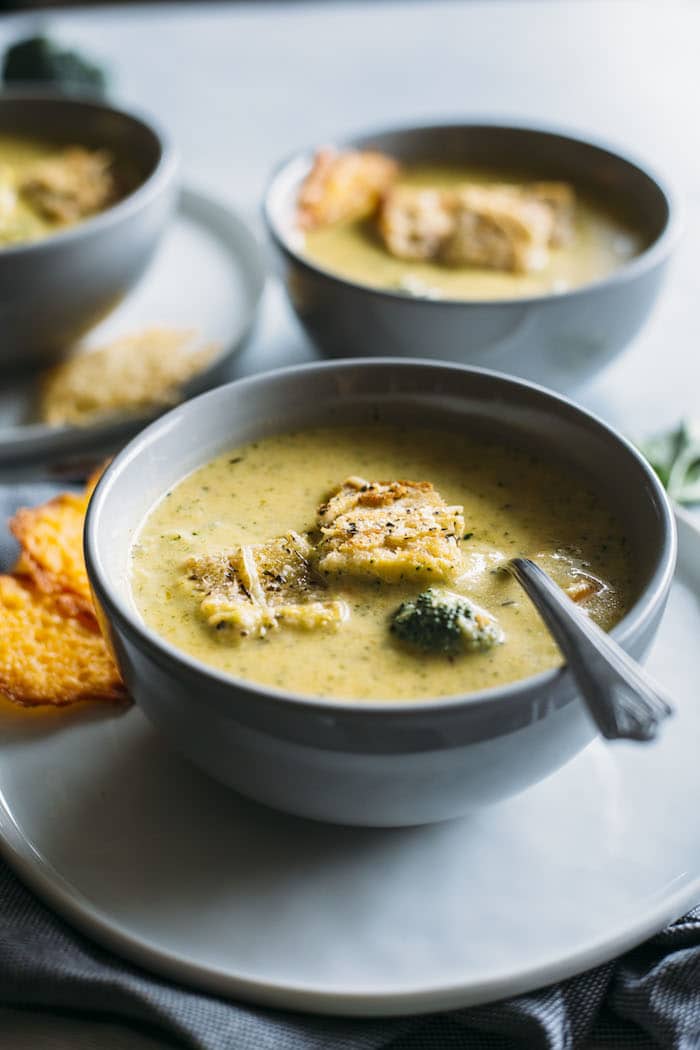 I think I said this last time I made soup, but it’s OFFICIALLY soup season! Last time I said it because the temperatures had dropped, but then they ended up going all fall-like and all over the place. Now, I think we’re sticking with fall weather. Heck, I’ve even had frost on my car the past few days. ….I’m in denial about wintertime.

How was your weekend?! Filled with friends, family and food I hope! If you saw on Instagram, then you already know mine was filled with scones. I was bound and determined to make them perfect and, though it took me three tries, Miguel said they were “the best scones” he’d ever had. <—whoa. Soooo keep your eyes out for those last this week or early next week. 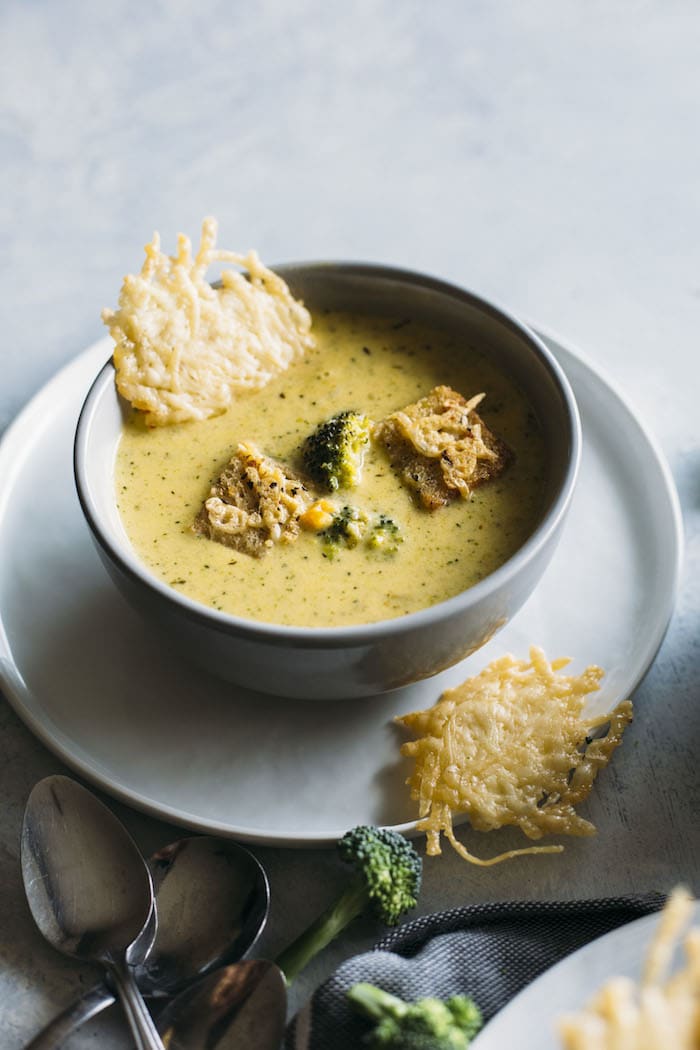 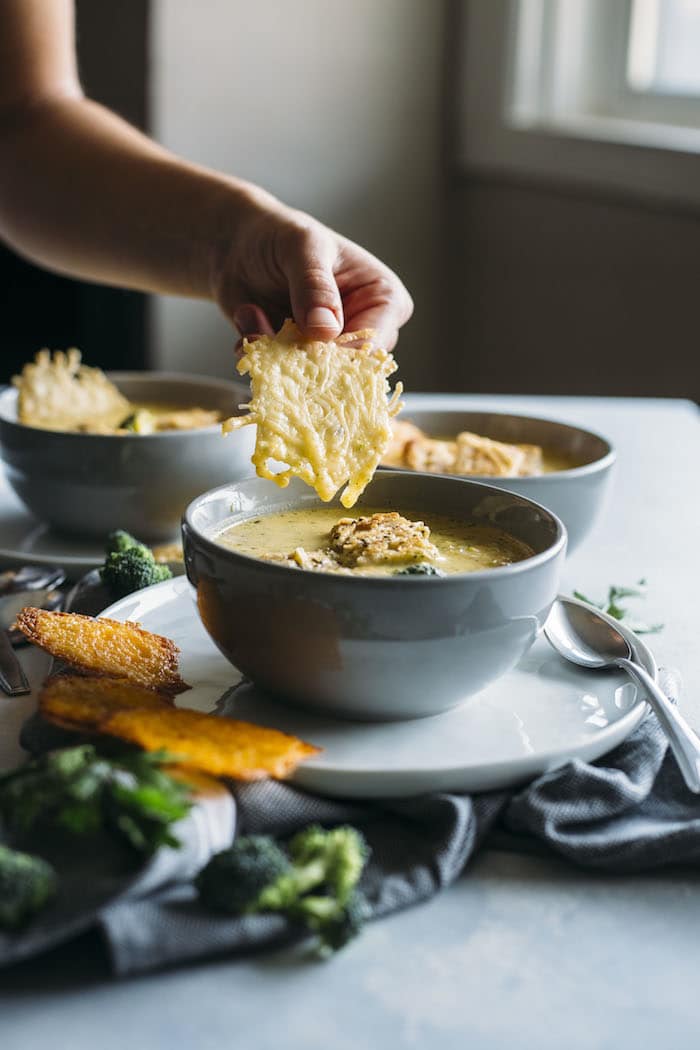 I think we can all acres that broccoli soup is the best soup out there. HOWEVER, and I know I can’t speak for everyone, but I often feel a tinge of guilt when I eat it (I typically only eat it when I go out to eat) because I know it’s quite possibly the least healthy soup. The good news is that it only takes about 30 minutes to make your own and this three cheese broccoli soup is (slightly) better for you! I hesitate to say “slightly” because of course it’s better than store bought/restaurant soup because you control the ingredients, but on the other hand it does contain a lot of cheese, which is to be expected in any recipe titled “three cheese”. NOT MAD, cause cheese is comforting, especially when you realize winter is right around the corner and you just need a big bowl of warm soup to cry in to.

As I was making this soup, I realized it’s somewhat similar to the potato soup recipe I recently posted. i didn’t mean to post something so similar, and they taste completely different, but the process for making them is the same aka EASY AS PIE.

For the cheese, I opted to use cheddar, colby jack and gouda. I wanted flavors that pair well together, and those three absolutely do. If you want to make the soup with only one cheese, go for cheddar. That’s what most broccoli “cheddar” soups call for (you already knew that though). 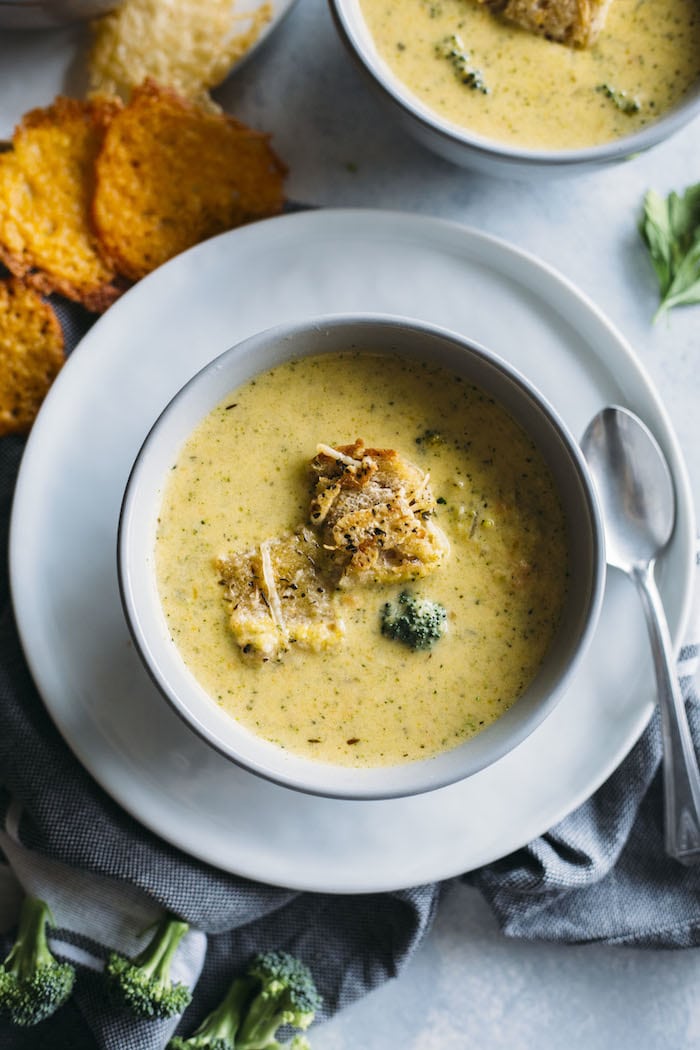 Last but not least are the CHEESE CRISPS. How could I forget to mention those? They’re completely optional but also completely wonderful and take all of 6 or so minutes to make. You just place two tablespoons of cheese on a baking sheet and bake it for a few minutes—you want the cheese to be bubbling. Also, they’ll turn crispy once they’re cooled down. MAKE ‘EM and thank me later! 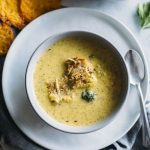 *If using low sodium broth, also add plenty of salt
**Only preheat the oven if you're planning on making the cheese crisps
Author: The Almond Eater