This Greek Yogurt Lavender Coffee Cake puts a unique spin on a traditional recipe—it’s super moist thanks to the yogurt with a cinnamon sugar swirl throughout and topped with a buttery crumb topping. 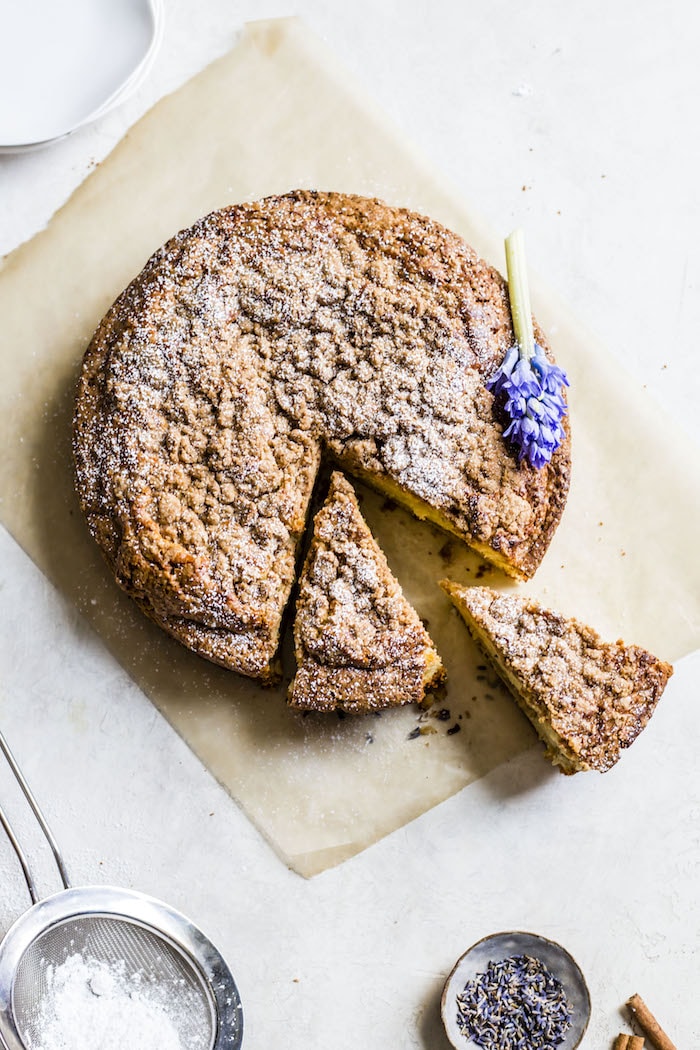 …aka the coffee cake of my dreams! Real question though, is coffee cake considered breakfast or dessert? I know it’s technically breakfast, but I feel like any kind of cake is or should be dessert, no?

When I go out to eat, I’m immediately attracted to anything with lavender in it. I’m not sure why, but I am. I think it’s because it’s such a unique flavor that you can’t find all the time, so when I do find it, I gotta have it (like Millie’s lavender ice cream aka my weakness in life).

Growing up, my mom made coffee cake fairly regularly. My brother and I would always get so excited because that meant we’d get a break from our normal breakfast, aka cereal. We’d cut ourself a slice, slather it in butter and warm it up in the microwave for 12-15 seconds (the scientifically proven appropriate amount of time for that perfectly warmed up temperature we were striving for). It was DEEEELICIOUS. 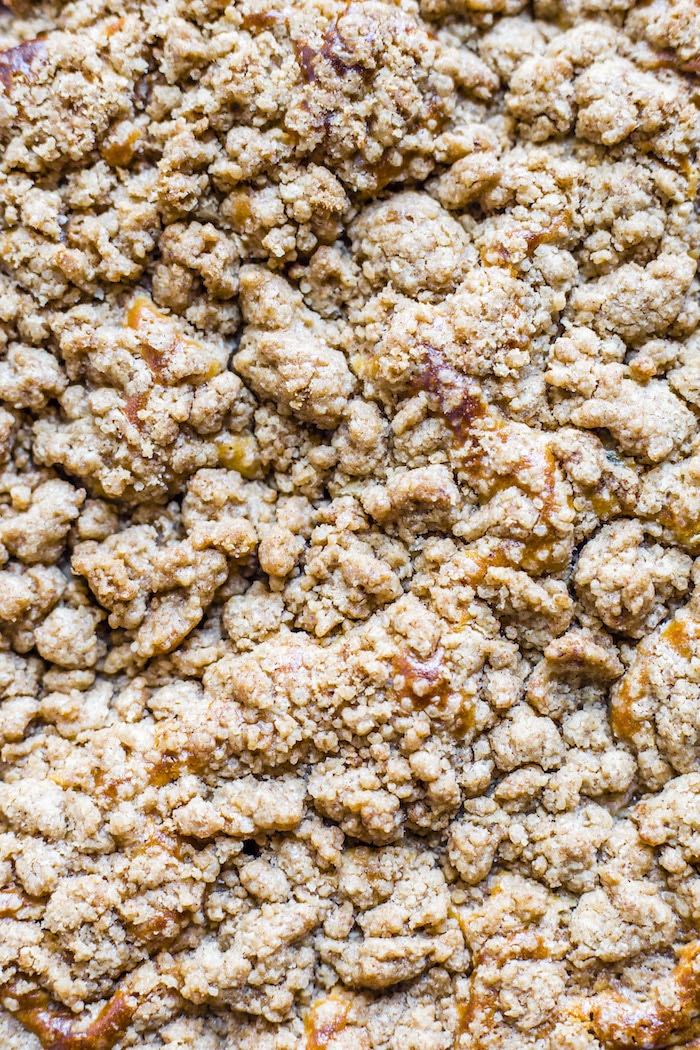 Did I do that with this lavender coffee cake? You bet, minus the butter. Maybe I should have added butter though. It’s not like this is healthy coffee cake… I thought about it—I did—but I wanted something more traditional but with a unique flavor spin, and this lavender coffee cake is just that. It’s super moist with a cinnamon sugar swirl throughout and of course lavender and it’s all topped with a crumb topping, because what is coffee cake without a crumb topping? Exactly. I also decided to add Greek yogurt because… well, because I had some that was going to expire. Often times in my vegan cakes I use applesauce to make them more moist, so I figured Greek yogurt would work well in this case, and sure enough it did! 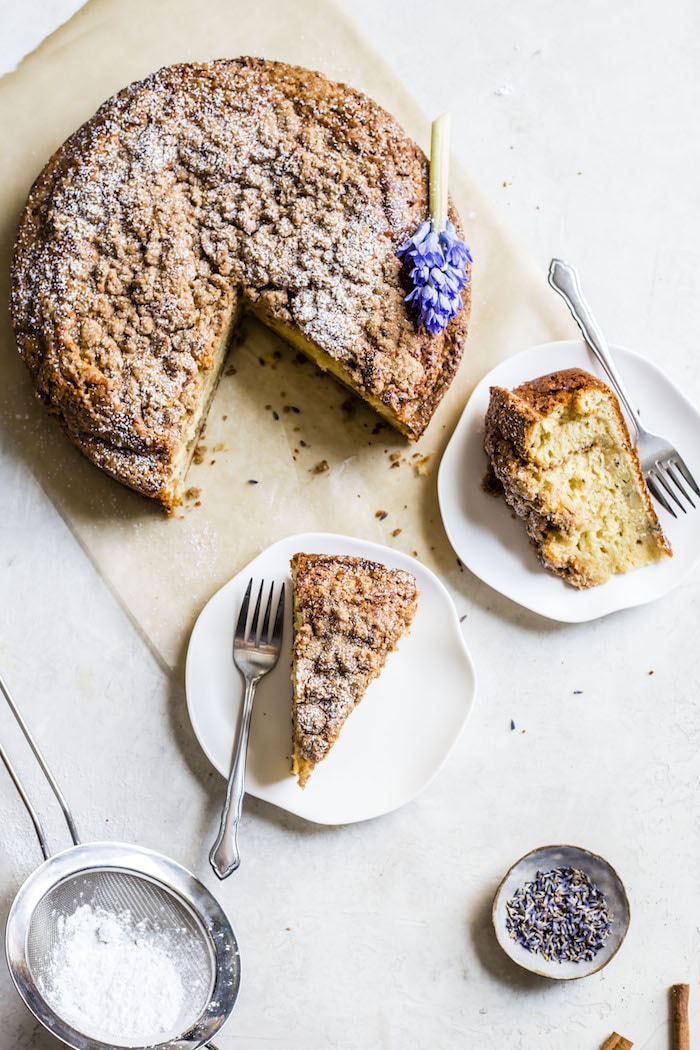 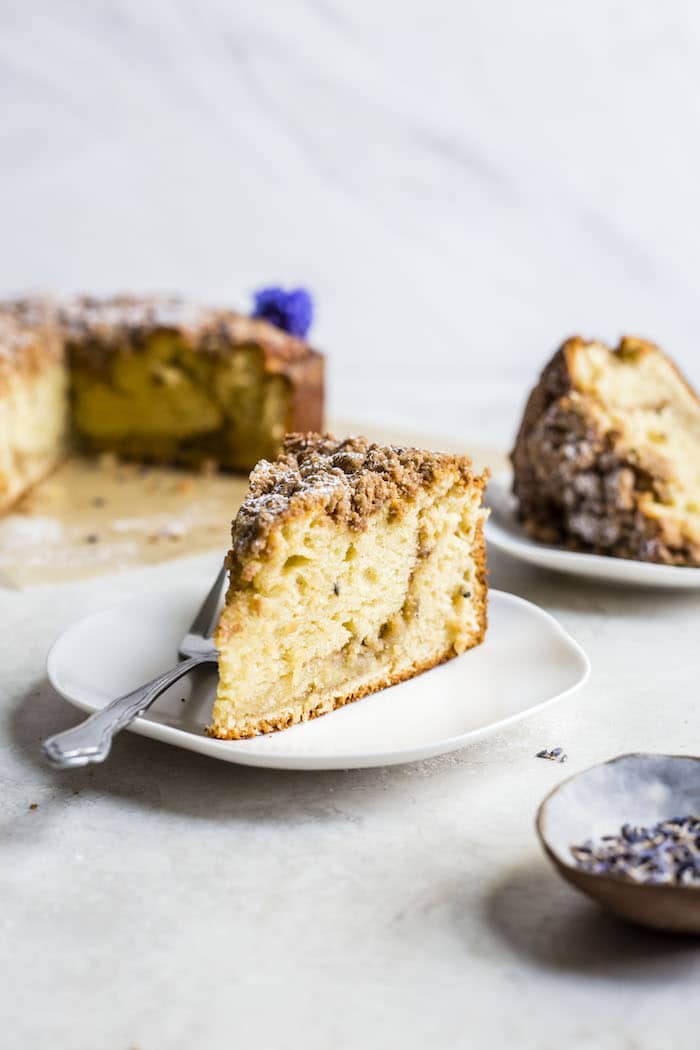 This cake is huge—well, it’s made in a 10” cake pan, so it seems kind of huge—so I had Miguel take it into work and everyone gobbled it right up (so he told me). And if you’re looking for the finishing touch, add a dash of powdered sugar on top. Just do it.

*Though not ideal, if you don't have a springform pan (I don't!) you can totally use a regular 10" cake pan. You'll have to flip your cake upside down onto a cooling rack in order to remove it from the pan and will lose a very small amount of your crumb topping in doing so, but I didn't find it to be a major deal. Just FYI!
Author: The Almond Eater